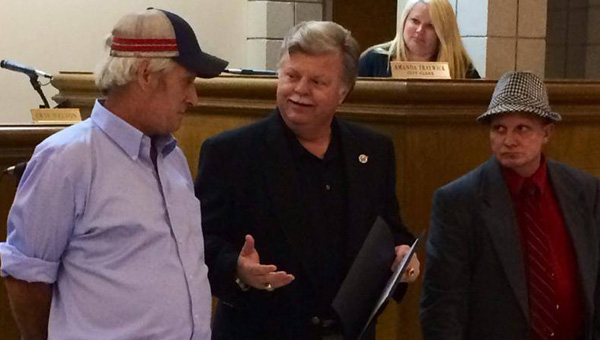 Helena Mayor Mark Hall presented Duane Lovelady and Ralph Watkins with the City Council and Mayor’s commendations for their actions after a July 31 plane crash during an Aug. 18 City Council meeting. (Contributed)

Helena residents Duane Lovelady and Ralph Watkins were presented with the City Council and Mayor’s Commendations for their heroic actions following a July 31 plane crash off of South Shades Crest Road.

“They went to the aid of the victims immediately, most likely saving the occupants lives,” Hall said.

Watkins immediately called 911, detailing the crash to the operator, while Lovelady went to the scene of the crash. Lovelady pulled the four victims from the burning plane wreckage while first responders arrived to the scene.

“(We felt) the city should do something to honor their effort,” Hall said, noting their “service and heroic efforts.”

Hall said Lovelady and Watkins were “emotional” and “genuine,” and said the presentation of the honors was “a great thing.”

“They didn’t run away, they ran toward the crash,” Hall said. “These guys saw the need for help… we appreciate their willingness to help.”