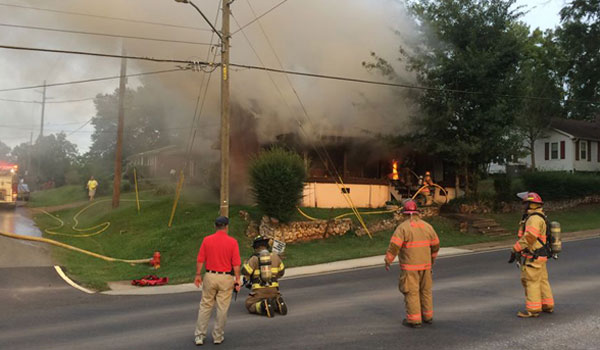 The Montevallo Fire Department and the First Battalion of Shelby County responded to a fire on Aug. 19. (Contributed)

MONTEVALLO—The Montevallo Fire Department and the First Battalion of Shelby County successfully responded to a fire with minimal injuries, according to Montevallo Fire Chief Bill Reid.

The fire, which started at approximately 6:37 p.m. on Aug. 19 at a home on Selma Street near Highway 119, originated as a kitchen fire according to an initial report.

Residents of the structure were home at the time of the fire, but all of the occupants got out without any injuries, Reid said.

There were three minor injuries to fire fighters, due to yellow jackets under the front porch of the residence.

“That made it interesting too,” Reid said. “We were just checking folks out to make sure they weren’t allergic.”

The fire was “completely out” within 30 to 45 minutes, but the fire “wound up gutting pretty much the interior of the house,” according to Reid.

“It’s basically just four walls and a roof,” Reid said. “In my opinion it could be considered a total loss.”

By MOLLY DAVIDSON / Staff Writer HELENA—Helena residents will soon notice an increase in their monthly utilities costs due to... read more