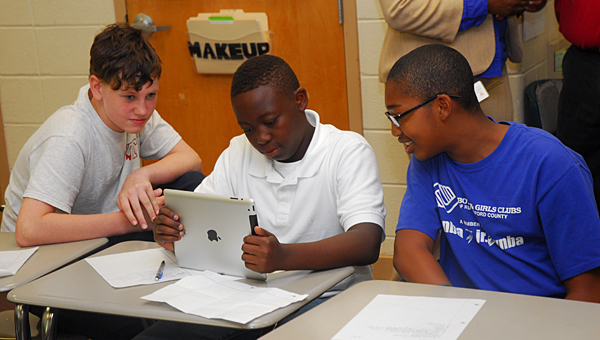 ALABASTER – Students in Todd Davis’ seventh-grade pre-AP geography class at Thompson Middle School talked quietly on the morning of Aug. 21 as they huddled around smartphones and tablets.

“Everyone is so engaged. They are taking ownership of their learning,” TMS Assistant Principal Desaree Jackson said as she looked over the classroom.

On a few days each week, Davis’ students use their digital devices to access to compliment the lessons they learn in the classroom.

On a recent quiz, Davis distributed sheets containing QR codes scannable by smartphones and other electronic devices. When scanned, the QR codes brought students to locations on Google Maps showing examples of geographic landmarks such as peninsulas, volcanoes and islands.

The students then used a separate piece of paper to identify which geographic category the Google Map location represented.

“They love to do it,” Davis said as his students scanned QR codes bringing them to Youtube videos explaining different types of geographic landmarks. “They are learning while they are doing this, but they don’t realize it.”

Through the school’s “bring your own device” program, students are able to bring their iPads, smartphones and other electronic devices to school to use in the classroom.

“It just makes it the same across the board,” Jackson said, noting the traffic light system has cut down on confusion with the school’s electronic device policy.