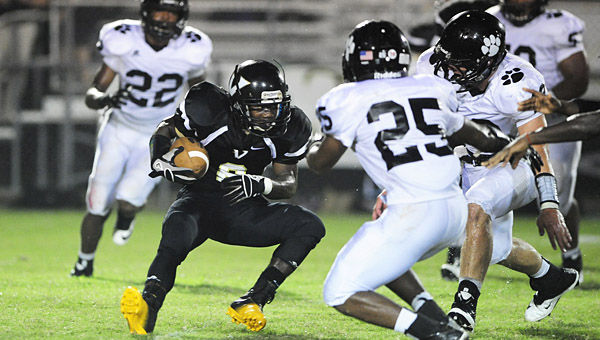 The Vincent Yellow Jackets will take on the West Blocton Tigers at home, with kick off scheduled for 7 p.m. at Harold Garrett Stadium on Aug. 22. (Reporter Photo/Jon Goering)

With less than 48 hours remaining before the kickoff of the 2014 football season, the Vincent Yellow Jackets are more than ready to take on someone other than themselves, according to head coach Jason Hill.

“I think the kids are more than ready,” he said. “I’m excited by our potential.”

Hill finds himself in a familiar position as he enters his second season with the Jackets. Vincent opened Hill’s first season with the team with an upset of the Tigers, 26-20, and ended up 6-4 on the season.

That said, Hill said he knows his squad will have a different look this season. The Jackets graduated 12 seniors from last year’s team, and feature a great deal of youth on defense.

‘I’m expecting us to be young on defense,” he said. “The biggest thing I like about our youth, we’re giving a great deal of effort pursuing the football. With inexperience comes eagerness to prove themselves.”

That youth will be tested by the offensive attack of the Tigers. West Blocton runs a triple option offense, something not seen a great deal among the modern trend of spread-style offenses, Hill said.

“(They’re) really, really physical,” he said. “They’re going to run the option. It really is not something we’ll see a ton of.”

While the challenge of gearing up for the option attack is a bit daunting, Hill said the rewards of taking down a larger opponent was rewarding. The AHSAA Class 2A Jackets’ win over the Class 4A Tigers helped the team to a 6-4 final record, Hill said.

“I really do feel it boosts overall morale (and) our belief in our schemes,” he said. Game one, being a team we’ve played before, we need to go out and have a good showing.”

The Jackets will take on the Tigers at home, with kick off scheduled for 7 p.m. at Harold Garrett Stadium on Aug. 22.

While the Jackets have lost a considerable amount of talent at the skill positions — notable quarterback Michael Gilham (pictured)... read more