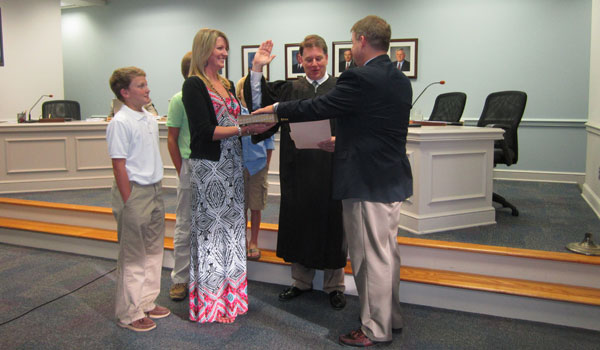 Kevin Morris, pictured with his wife and three children, is sworn in as interim board member for the Shelby County Board of Education. (Reporter Photo / Ginny Cooper McCarley)

COLUMBIANA—Kevin Morris, who will replace Board Member Steve Martin following his resignation, was sworn in by Shelby County Circuit Judge Bill Bostick prior to the board’s Aug. 21 meeting.

“It is my privilege to swear in Kevin to this very important office,” Bostick said. “Starting today you will be bound by a solemn oath…and you have an obligation to the duties of the office to which you are about to enter.”

Morris, who lives with his wife and three children in Wilsonville, is vice president of consumer lending for America’s First Federal Credit Union.

During his Aug. 7 interview for the position, Morris cited his background in finance as a benefit for the board.

“Coming from the business world outside of (education), my financial background, the different processes I’ve been involved in…I think that I could bring that professional approach,” he said.

Bostick said he first met Morris through Leadership Shelby County, and was impressed by his extensive volunteer work.

“I’ve known Kevin for the last 10 years or so,” Bostick said in an interview following the ceremony. “I know he’s going to do an excellent job with the school board.”