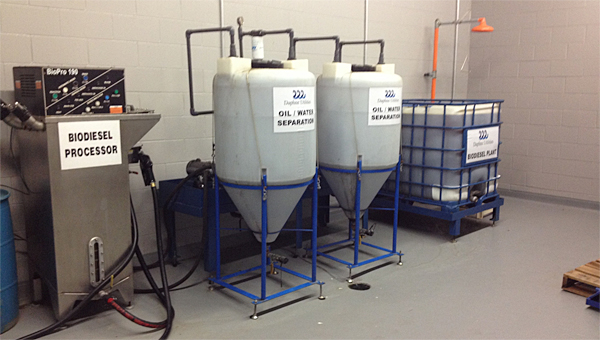 Alabaster is considering a biodiesel and grease recycling program modeled after the city of Daphne’s facility pictured. (Contributed)

ALABASTER – Alabaster leaders are looking at the possibility of bringing a household grease recycling program to the city, which could be used to cut down on diesel fuel costs for the city’s public works department.

Through the program, Daphne has set up used oil recycling stations in high-traffic areas throughout the city. The stations are stocked with empty white jugs, and residents can use the jugs to collect cooking oil and grease before returning the filled jugs to the recycling station.

A Daphne city employee then collects the used grease and oil and transports it to the biosolids facility. The oil is then run through a pair of oil-water separators before it is fed to a biodiesel processor.

Once the processor creates biodiesel, it is then mixed with regular diesel fuel to power backhoes, tractors and other diesel-powered equipment used by the city’s fleet. The fuel cost savings then allows the city to use more money toward other services and projects.

The program also helps to keep household grease and oil out of Daphne’s wastewater treatment plant, which Walters said is one of the hardest substances to remove when filtering wastewater. Walters said Alabaster is particularly interested in the grease recycling program, as it will help the city meet federal water purity guidelines to be enacted in 2020.

“Our water has to be cleaner to meet the water purity standards that are coming in 2020,” Walters said. “Right now, the technology to meet that threshold doesn’t exist.

“Grease is the hardest thing to get out of water,” Walters added. “Every gallon we can keep out of our wastewater, it will save costs.”

“It’s a win-win. We are trying to be responsible, and this is a service we think can be provided to our ratepayers,” Walters said.

The AWC hosts Chirps and Chips