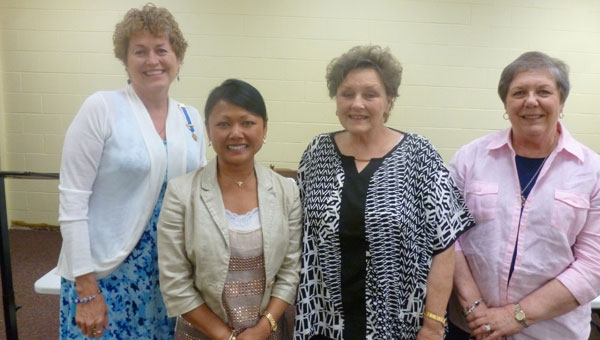 Have you ever wondered what the Daughters of the American Revolution is all about? Do you think you may qualify for membership? The only DAR chapter in Shelby County, David Lindsay, is having a prospective membership social on Wednesday, Sept. 3, at 12:30 p.m. at the Columbiana Public Library to answer all your questions.

The DAR was founded on Oct. 11, 1890, during a time of revival and intense interest in the beginnings of America. The DAR is a non-profit, non-political woman’s service organization who volunteered more than 3.5 million hours in 2013. The three main objectives formed in that initial meeting have remained the same over 125 years: historical, educational and patriotic (www.dar.org).

More than 800,000 women ages 18 and older have joined the DAR since 1890. Current membership totals 177,000 women who can prove direct lineage from an American patriot regardless of race, religion, or ethnic background.

The David Lindsay chapter was founded in 1927 in Montevallo by Mrs. E. H. Wills and 16 charter members. Today, the chapter has more than 50 members and meets the first Wednesday of the months September, October, November, December, February, March and April: 1 p.m. fellowship and 1:30 p.m. meeting at the Columbiana Public Library.

The chapter’s namesake, David Lindsay, was a private with the 2nd, 3rd, 4th, and 6th Regiment of the Virginia Continental Lines. Lindsay and his family were pioneer settlers, moving to Shelby County before 1820. Several of his descendants are active members of the chapter.

The Sept. 3 new member social will serve a light lunch, answer questions all about DAR, and offer help with your lineage. Regent Margaret Clark will lead the program along with Past Regent Rita Reid and Registrar Judith Arthur. Prospective new members are encouraged to come at 12:30 p.m., lunch will be served at 1 p.m., and the meeting will start at 1:30 p.m.