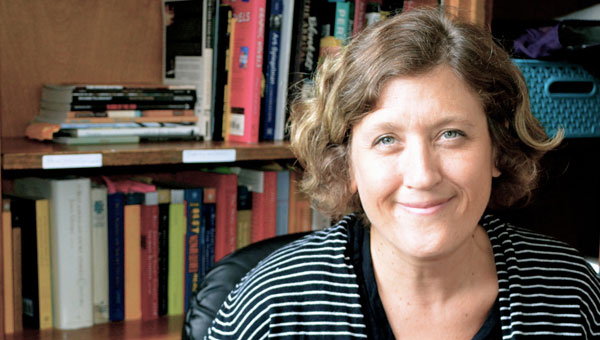 Add Bryn Chancellor to the list of accomplished artists living in Montevallo. Chancellor, assistant professor at the University of Montevallo, was recently awarded the Prairie Schooner Book Prize in fiction for 2014, for “When are You Coming Home?”—a collection of short stories. As well as receiving a $3,000 prize, the University of Nebraska Press will publish her collection.

Chancellor grew up in California and lived more than 20 years in Arizona, so her connecting element in her short stories is place, as the settings are mostly in Arizona.

“Arizona has a striking landscape,” Chancellor said. “The dry, flat lands contrast with rocky mountain peaks just as sparsely populated areas give way to urban cities like Phoenix, and a variety of cultures contrast yet meld together to create this complicated, yet beautiful place. Since leaving there, I find myself returning through my writing.”

The accolades for Chancellor’s work do not end with the Prairie Schooner award. She also received the 2014 Poets & Writers Maureen Egen Writers Exchange Award, which chooses a different state each year from which resident writers may apply. In addition to a $500 prize, Chancellor will present a reading in New York City and participate in a one-month writing residency at the Jentel Artists’ Program in Wyoming.  She has also recently received a Literary Arts Fellowship from the Alabama State Council on the Arts.

Asking Chancellor to list these accomplishments in succession elicited smiles tinged with a bit of incredulity. She spoke of reading much growing up but not delving into a writing life until her mid-20s, through undergraduate courses and then more profoundly through graduate level creative writing classes.

“We all have our own path,” Chancellor said.  “Writing is persistent work. One must keep writing, and one must be willing to learn, especially through failures. Like batting in baseball, a player fails to make hits quite often.  A batting average of .325 is great, and that’s not even hitting half of the at-bats. Such is the writing life: Failure may come more often than success, but it is what we learn from those failures, those misses at-bat, that help create our successes.”