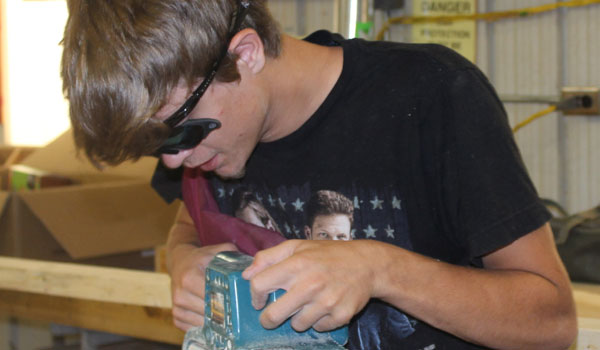 A SCCC student uses a belt sander to smooth the track he is helping to build for the Belt Sander Race. (Contributed)

Construction Technology students at the Shelby County College and Career Center have found a creative and fun way to combine learning construction skills with racing.  The students, under the leadership of instructor Van White, have constructed wooden tracks that will be used to race belt sanders.

White got the idea to do the project with his students after participating in a home renovation job with the television show This Old House.  He also learned that there is a profession Belt Sander Racing Association that holds championship races.

“Some of the guys would have these belt sander races during their breaks from working on the house,” White said.  “It looked like a lot of fun.  I thought it would be a great project for my students to design something that must be precise and then build it.”

Students were given a set of materials that consisted of an eight-foot piece of plywood, several pieces of two-by-four lumber measuring 16 feet in length, and a belt sander with a 16 foot cord.  The goal is to build a track that will allow the belt sander to race down from one end to the other.

The 25-foot-long track has to be built so that it will not inhibit the forward motion or flow of the belt sanders as it races down it.   For example, two pieces of lumber that are not constructed with proper joints might jut out to impede the motion of the sander.  A track that is built too narrow or too wide could also cause problems for the sander, which might get stuck in a narrow track or bounce off the sides of one that is too wide.

In addition to the track, the students must also wire an extension cord that will automatically release from a power strip in order to power down the sander once it reaches the end of the track.

The students will be holding the Belt Sander Race at the College and Career Center on Monday, August 25 at 12:30 p.m.   White said if the project is successful at the SCCC he hopes to be able share the idea with instructors at other local career technical schools and SkillsUSA to see if the races could be expanded in order for the schools to race and compete against each other.