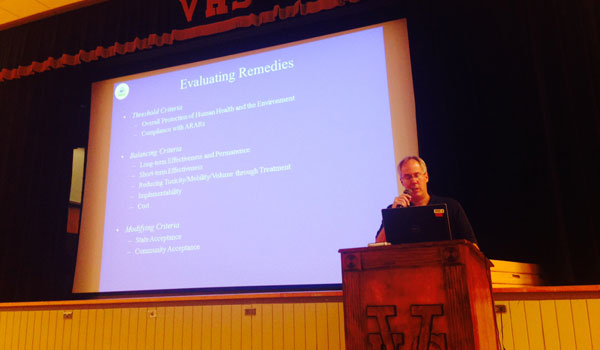 VINCENT—About 40 Vincent residents gathered for a public hearing hosted by the U.S. Environmental Protection Agency and the Alabama Department of Environmental management to discuss the proposed cleanup plan for the Alabama Plating Superfund site.

The site, which is located at the corner of U.S. 231 and Shelby County 60 and encompasses six acres, was the location of a plating operation from 1956 to 1996, when ADEM shut down the site due to permit violations.

The operation generated waste containing zinc, cadmium, copper, lead and other heavy metals into the soil. In sample testing, surface soil in the area contained cyanide and benzo(a)pyrene in levels above EPA residential levels. Maganese and cadmium exceed drinking water standards in water found in the area.

EPA Project Manager Scott Miller presented the department’s proposed plan to clean up the remaining contamination during the Aug. 23 hearing.

Currently, the human health risk, based on exposure to the groundwater over a 30-year period, is 7 in 100,000 for future children, meaning 7 in 100,000 children exposed would develop cancer, Miller explained during the meeting.

To improve the water in the area, the EPA will “take the treatment to the contamination” by injecting chemicals in the water to extricate the remaining heavy metals and “allow nature to take its course” in the area.

Community members expressed a number of concerns with the project, including how long the agency would continue to test contaminants in the area and how far down Spring Creek the water was tested.

John McHutchen expressed concern about a well on his property, which the agency had not tested.

“I asked to have that tested, but it was never tested,” McHutchen said.

Judy Noggle wished to know why the EPA did not choose to pursue other alternatives for the cleanup project.

“We think we can clean it up faster and in a more effective way (with this method),” Miller said.

EPA Community Involvement Coordinator Kyle Bryant emphasized the positive aspects of the cleanup, which will cost more than $3 million in federal money over a 30-year period.

“You can use this as leverage for other funding,” Bryant said.

Miller outlined the next steps in the project, and estimated that remedial action would begin in 2016 if the funding is available.