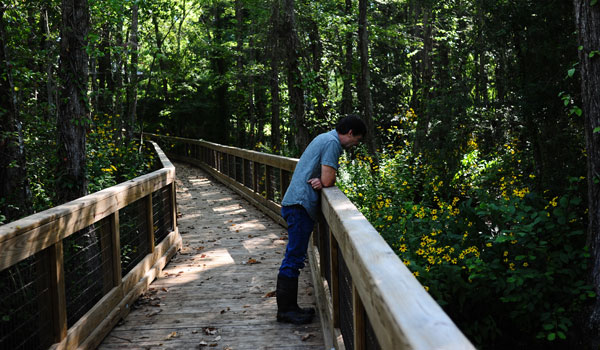 Dr. Mike Hardig looks out onto Ebenezer Swamp, which contains a variety of plant and animal species. (Reporter Photo/Jon Goering)

“The Swamp” immediately intrigued Dr. Mike Hardig when he joined the University of Montevallo as a professor of biology. The property was donated to the university in 1998, and Hardig—a botanist by trade—spent the following summer exploring the area.

“In the summer of ’99, I got myself some boots and a big stick—I’d heard about the Cottonmouths—and the first day, I walked in and I began exploring the swamp and it was a great treat,” Hardig said. “I’d never seen anything like it. It’s beautiful and the vegetation is amazing. I started thinking about how we could use the swamp to further our education program without dragging people through the muck with hip boots on.”

To that end, Hardig and others with the university decided to build a boardwalk where visitors could enjoy the swamp from above.

Beavers, otters, wild turkeys, red-shouldered fox and all sorts of owls can be spotted in the area, which also shelters endangered plant species including a community of Tennessee yellow-eyed grass.

A giant egret, frog and dragonfly—designed and sculpted by University of Montevallo art students led by Professor Ted Metz—are also nestled among the trees at the mouth of the trail.

The sculptures are made out of raw, recycled steel and are not coated or protected in any way, so the evolution of the sculptures mimics what happens naturally within the ecosystem of the swamp.

“It’s the idea of nutrients, elements returning to the soil to be incorporated by the plants and then by the animals and back into the soil,” Hardig said. “They will rust, oxidize and return to the soil.”

For Hardig, sharing the wonders of the swamp with students is a primary goal.

“I remember when I was a little kid going on a fieldtrip to a little park…I think it was a major point in my life, and what I want to do with this is create that experience for other kids coming up,” Hardig said. “Maybe the next E.O. Wilson will get their spark of interest here at Ebenezer Swamp.”