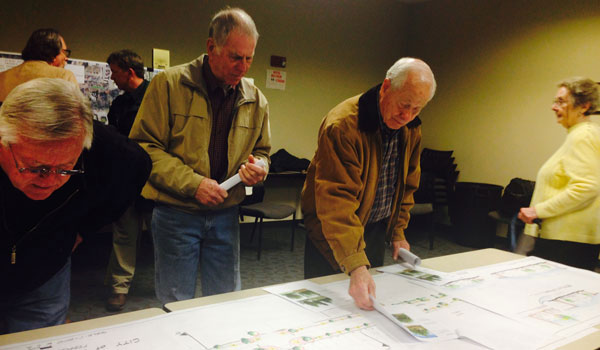 Montevallo citizens examine project information and maps made available to the public during a Feb. 28 public hearing. (Ginny Cooper McCarley/ For the Reporter)

MONTEVALLO—ALDOT engineers assigned to the Main Street Revitalization Project responded to a list of questions concerned merchants and stakeholders submitted to the city.

The $2.85 million downtown revitalization project, which is slated to begin in the summer of 2015, would enact roadway improvements on Main Street from West Street to Bloch Street in Montevallo, such as widening the street by making all northbound parking parallel, adding a variety of tress and greenery, and moving all utilities to the back of the buildings.

Seven of the 16 questions addressed concerned parking. One concern expressed in the document was the loss of parking spaces on Main Street.

Under the proposed project, the number of parking spaces would be reduced to 88 from 109 existing spaces. In order to compensate for the loss, the county has already striped 25 parking spaces along Island Street and identified an additional 43 potential new spaces along Shelby, Middle and Vine Street, according to the engineers’ response.

“While there will clearly be times when the Main Street Revitalization Project will cause some temporary, minor inconveniences, the purpose of this project is to help improve the economic viability of our downtown merchants, not to drive them out of business,” the city stated in response to a question concerning loss of business to downtown establishments during construction.

Construction on the project will take “approximately one year,” the response document stated.

Steve Gilbert, executive director of the Montevallo Chamber of Commerce, emphasized communication as a key to success in the project.

“We’re here, trying to communicate with all the entities involved,” Gilbert said. “We’re trying to make sure we’re sharing all the information we have at this point.”

ALDOT hosted a public hearing for the project on Feb. 28, where public opinion was divided on the project.

Bruce McClanahan, owner of Main Street business House of Serendipity, expressed concern that the improvements would force his business to close.

“It’ll kill it,” McClanahan said during the hearing. “Unless (customers) can park in front, they’ll drive on by and go to Alabaster.”

“With change comes a certain amount of apprehension,” Gibert said, noting “there are going to be inconveniences.”

“A lot of improvements come along with this,” Gilbert said. “This will be a safer, better look.”

The Pelham Police Department responded to an assault at Reddy Ice at 6:50 a.m. on Aug. 28. (Contributed) From Staff... read more