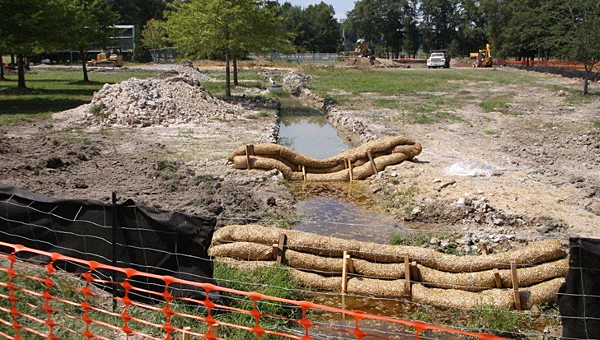 Alabaster is working to install a retention pond near the Beneful Dog Park to combat a muddy area of standing water. (Contributed)

ALABASTER – The wet, muddy area near the Beneful Dream Dog Park in Alabaster’s Veterans Park soon likely will be a thing of the past, as the city is working to install a new retention pond at the park.

City crews recently began work on the about 1-acre pond, which will be near the dog park, and likely will have it completed “within the next couple of weeks,” Alabaster City Manager George Henry said during an Aug. 28 City Council work session.

Before work on the pond started, runoff water frequently flowed from Wynlake Drive and pooled over and around a walking path near the dog park, often creating a muddy, odorous area, Henry said.

When the retention pond is completed, it will be about five or six feet deep, and will collect water and divert it away from the dog park and the walking trail.

Henry said the city is constructing the retention pond in-house to keep costs at a minimum, and said the pond will constantly be filled with water once it’s completed.

The Beneful Dog Park, which is in the southwest portion of Veterans Park off Alabama 119, is a popular attraction to area dog owners, and opened in 2012 after former Shelby County Humane Society Director Jenny Wilson won a national Beneful Dream Dog Park contest.