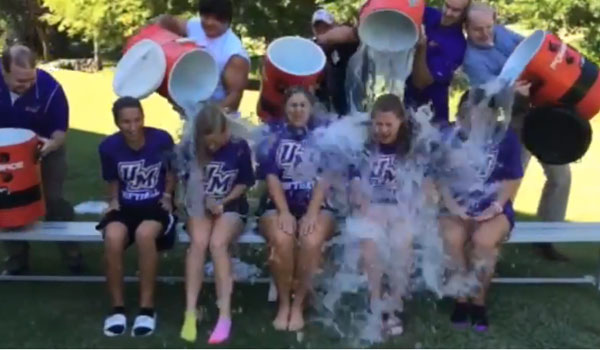 Members of the University of Montevallo softball team participate in the ALS ice bucket challenge. (Contributed)

Though most of the team was not yet on campus, a few students who lived locally participated the challenge.

“(ALS) is a tough disease people are fighting and anything we can do to provide awareness is awesome,” Vanover said.

The team chose to donate the money they raised to Shelby Emergency Assistance, a local non-profit that aims to “help people move from crisis to self-sufficiency in Shelby County,” according to their website.

The team nominated Jennifer Steel of Jacksonville University, Erica Ayers of Georgetown University, Laura Streets of Townson University and Montevallo Mayor Hollie Cost, a professor at the University of Montevallo as well as Dr. John Stewart, president of the university.

“(Dr. Stewart) was such a trooper for doing it,” Vanover said.

Stewart’s ice bucket video features the president in a suit and tie, talking on his cell phone with a cup of coffee in hand before getting drenched with a bucket of ice water.

“(The video) is hilarious,” Vanover said.

Stewart—who noted he was “really, really proud” of the new softball coach for getting the challenge started on campus—has a personal connection to the disease after losing two good friends to ALS in recent years.

“I just felt it’s important that the president, like anybody else, needs to be part of such an important movement,” Stewart said. “It’s just a fun thing to do.”

Vanover estimated that 30 UM employees and staff have participated in the challenge, including “almost every” coach and assistant coach.

“The University has such a great tradition of community service and activism,” Stewart said. “This was just a lot of fun and a really great challenge.”