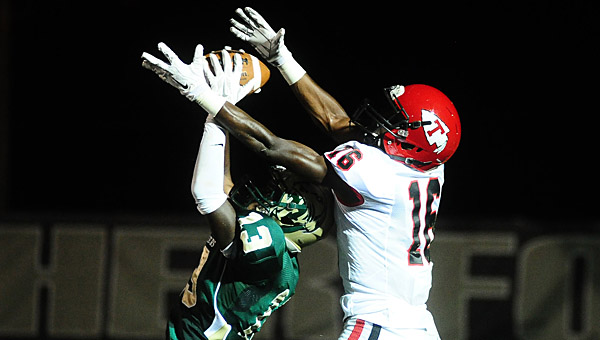 Pelham’s Jeremy Ross comes down with a pass in the end zone intended for Thompson’s Patrick Haywood during the Panthers’ 23-19 victory over the Warriors on Aug. 29. (Reporter Photo/Jon Goering)

PELHAM – The Pelham Panthers used a 73-yard scoring drive with less than two minutes left in the game to take down the cross-town rival Thompson Warriors 23-19 at Ned Bearden Stadium on Aug. 29.

“We got the trophy back. That’s a big deal to us and to this city,” Pelham head coach Brett Burnett said, referencing the Game Ball trophy given to the winner of the annual Battle for U.S. 31 between Pelham and Thompson. “This was a great win for our team and for the entire Pelham community.”

“We’ve got to finish every play we start,” THS head coach Mike Montgomery said after the game. “We’ve just got to continue to work and get better.”

A Warrior touchdown early in the fourth quarter put Thompson up 19-8, but Pelham fought back with a pair of fourth-quarter touchdowns, a 2-point conversion and a successful PAT to take a 23-19 lead late in the game. The first touchdown came on an 8-yard pass from quarterback Logan Burnett to Tyler Wilburn, and Moregan sharp added the 2-point conversion. The second fourth-quarter touchdown came on a 3-yard pass from Burnett to Wilburn, and Austin Bowen added the successful PAT.

“Our guys showed a lot of determination and a lot of fight. They didn’t give up,” Burnett said of the go-ahead drive. “I’m proud of them.”

The Panthers gave the Warriors the ball with 12 seconds remaining in the game, and a game-saving tackle by Jon Drake sealed the victory for the home team.

Thompson answered with a 27-yard field goal by David Buckalew in the second quarter, followed by a 40-yard field goal early in the third quarter. Senior THS quarterback Zach Brammer connected with Patrick Haywood on a 26-yard touchdown pass late in the third quarter and Carlos Stephen added a 1-yard touchdown run midway through the fourth quarter, followed by a successful Buckalew PAT.