Phil Morris is a pen artist 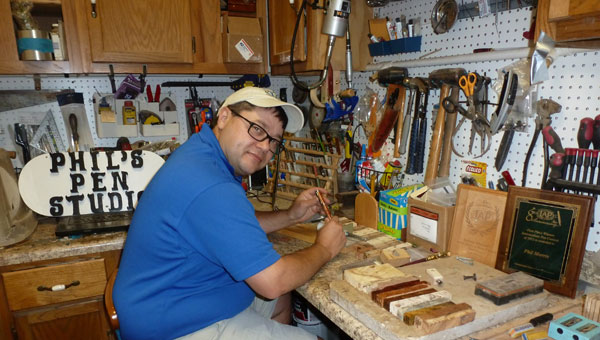 Phil Morris in his studio workshop, where he makes his award-winning pens. (Contributed)

Behind the garage of a home in Shelby County’s Kingdom community is a small workshop filled with tools including lathes, Dremels, sanders, molds and carving knives. This workshop is where pen artist Phil Morris creates his one-of-a-kind pens.

Morris loves to work with his hands – always doodling since he was a child. He especially loves to draw eyes. For years, one of his father-in law’s friends had encouraged him to try woodworking.

“For 18 years, Larry Thomas was after me to try my hand at a lathe,” said Morris. “He is a real woodworker and turner. Finally I did it in March, 2011, and WOW, did I like it! The instant gratification of creating something from nothing was very appealing. I had no tools, nothing. That first Christmas my wife gave me a lathe. I have been turning and creating pens since.”

Morris joined the International Association of Pen Turners which has pen artistry contests. Morris entered and won second place his first contest. He won the second contest with his intricate inlayed pen which had 77 pieces and took three weeks to make. Morris began giving his pens as gifts and word began to spread. Soon, he entered art shows and began to sell his pens to earn money to reinvest into better tools and supplies. At the Moss Rock Festival, the wife of Alabama Secretary of Commerce saw his work which brought it to the attention of Gov. Robert Bentley. Bentley needed gifts to take on business finding trips to Japan, and took Morris’ pens.

“I can make a pen in a couple of hours or several weeks,” said Morris. “I use all kinds of materials from hog tusks, elephant ivory, deer antler, alligator jaw bones, Alaskan sheep horn, turquoise and even feathers. For metals, I use from rhodium to gold, black titanium, chrome and silver. The cost of the pen depends on the materials and time to create. I can make an ink fountain or roller ball pen. My mother-in-law makes my pen display pouches.”

Costs range from $50 up.  See Philspenstudio.weebly.com or contact Morris at firewhatfire@bellsouth.net.