THS class of ‘94 together again 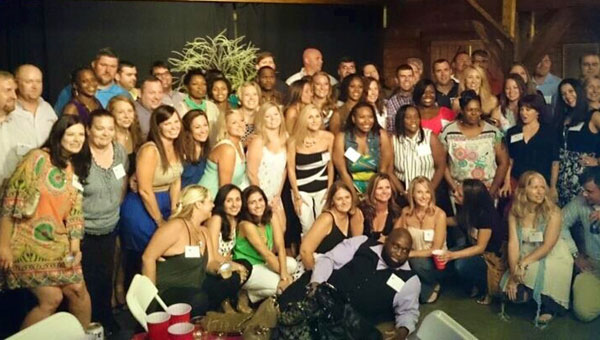 The THS class of 1994 recently celebrated their 20th reunion. (Contributed)

Twenty Years! There were the usual flirts, class favorites, successful businessmen and women, intellectuals, athletes, dependable, talented and even stressed moms and dads who had to “think about it” to absorb the reunion atmosphere of the 1994 Thompson High School class.

So glad to see each other, more than 100 class members plus spouses joined together at the American Village Barn on Saturday, Aug. 16. Julissa Vallejo Clark traveled from Texas and several others came from nearby states, according to Melony Thomas.

Organizer Keith Shoemaker, a former class officer now residing in Atlanta, and his helpers Melony Thomas, Piper Cumbo Wise and Melanie Higgins McGillicutty did a great job. Music from the ‘90s forward was on tap as well as “roving photographers” and “selfies” galore. Also kudos to Christie Davidson Lowe who did much of the artwork. Keith Shoemaker was the “ghost” DJ due to a last minute glitch and Courtney Thames Miller was the “loudspeaker”.

There were groups of former cheerleaders, ballplayers, band members, dance team, computer wizards, class officers, SGA, Christian athletics, beauty contestants…everyone you can imagine having a past or present interest in Thompson High School. The former principal from that era, Jim Elliott and his wife were guests.

Tall tales of previous failures and triumphs were talked about among groups, but in general the night seemed to revolve around a fun get together and a night away from the kids.

Teachers, coaches, business men and women, self employed entrepreneurs, computer proficient experts and stay at home moms all talked about our country, the military, the economy and that old favorite, the upcoming football season. After all, that’s life.

The most noticeable thing was that the group seemed to naturally blend together even after all these years. Everyone mingled, hugged, reminisced and danced the night away. It was difficult to believe that so many of these young adults I have personally known and loved for so long are pushing 40. You’d have never known it on the evening of Aug. 16. Piper Cumbo Wise said “No complaints…..only talk of when we can get together again.”