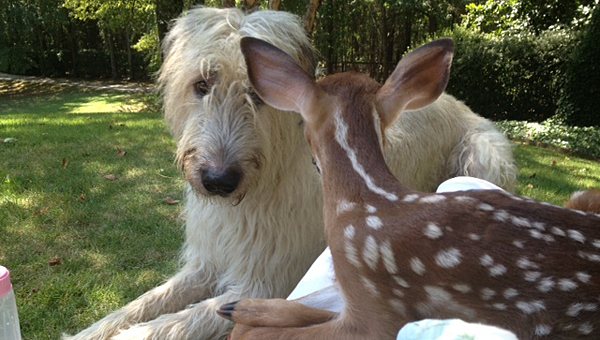 Desmond the dog keeps watch over a baby deer he helped to rescue at his family’s home off Cahaba Valley Road. (Contributed)

INDIAN SPRINGS –Since the Dudley family sent a 3-pound baby fawn to Wild Mammal Care of Alabama a few days ago, the family’s 175-pound Irish wolf hound, Desmond, has been combing the house looking for the infant animal.

“He has been sad. He keeps looking for her in the house, and he’s been sniffing the hole we found her in,” said Ahrian Dudley.

On the morning of Aug. 29, Dudley’s husband, Stewart, had taken Desmond on his daily walk through the family’s pasture off Cahaba Valley Road. When it was time to return to the house, Stewart Dudley was unable to find Desmond, who is usually close to his owner’s side.

“He called a number of times, and Desmond did not respond, which is very unusual for him,” Ahrian Dudley said. “My husband went back to find him sitting next to a hole about 6 inches wide and 4 feet deep where a tree had died.”

Desmond whined to get his owner’s attention, and repeatedly stuck his head into the hole to lick something. When Stewart Dudley looked into the hole, he saw the white tips of a baby deer’s ears.

“Desmond continued to cry until Stewart carefully pulled the fawn out,” Ahrian Dudley said, noting the fawn had injured its legs in the fall. “She was so tiny, and had probably been in the hole for two days.”

At the advice of Wild Mammal Care of Alabama, the Dudleys placed the fawn in high grass on their property at nightfall to see if the baby’s mother would return. When the mother did not appear, the Dudleys began to bottle feed the fawn goat’s milk to help combat dehydration.

“Desmond of course thought she was his, and while I would bottle feed her he would lick her face and nuzzle her,” Ahrian Dudley said.

Soon after the Dudleys started caring for the fawn, Wild Mammal Care of Alabama got an opening in its rehabilitation program, and currently is caring for the deer at its Birmingham facility.

For the Dudleys, Desmond’s behavior toward the baby animal was nothing new.

“He has adopted two stray cats that he protects, and (he) plays with the family ferret as well,” Ahrian Dudley said. “He is a gentle giant when it comes to small animals and children.” 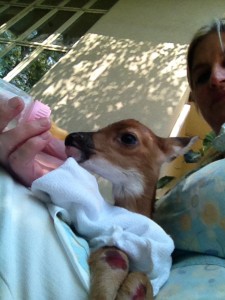 By NEAL WAGNER / Managing Editor COLUMBIANA – A 32-year-old Columbiana woman will spend the next year in prison after... read more