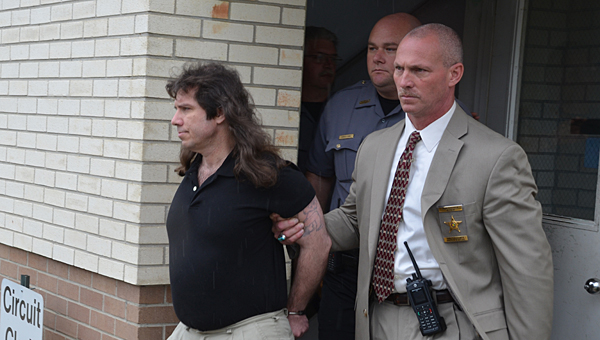 Shelby resident James Osgood, left, is led from the Chilton County Courthouse during his murder trial in May. (File)

A request for a new trial is the first step in the appeals process.

The jury during the court proceedings heard gruesome and graphic details about the way Osgood and Tonya Vandyke, 43, attacked Brown, in Brown’s bedroom.

Both Osgood and Vandyke forced Brown at gunpoint to perform sexual acts with both of them before Osgood slashed Brown’s neck several times with a knife or similar object and later in the back twice, according to testimony at trial.

Brown died on the bedroom floor of her trailer off County Road 24.

Vandyke, a co-defendant in the case, was Osgood’s girlfriend and Brown’s first cousin.

She faces two counts of capital murder but will be tried separately from Osgood.

Vandyke’s trial is expected to begin in December.

In June, Reynolds sentenced Osgood to death on his two convictions of capital murder.

Osgood appeared in court Tuesday afternoon wearing a pink jail jumpsuit with chains around his wrists and ankles, with a new short haircut and sitting inches away from his legal representation.

Osgood’s attorney Kim Kervin filed a motion in late June requesting a new trial or a verdict of acquittal.

The motion listed 39 grounds for a new trial including claims the sentence of death was “cruel and unusual punishment in violation of state and federal laws.”

Other grounds listed in the motion claimed the verdict in the case was contrary to the law and contrary to the weight of evidence. Additionally, Osgood did not receive a fair and impartial trial, and the trial court erred in allowing testimony regarding DNA testing, according to court documents.

Prosecutors argued that actions during the weeklong trial were done properly and the motion for a new trial should be denied.

Reynolds did not immediately rule on his decision during the hearing on Tuesday, but later filed an order denying the motion for a new trial and motion for judgment of acquittal.

Currently, there are 193 inmates on death row in Alabama, according to the Alabama Department of Corrections website.

Of them, 190 are men and three are women, with the average age of inmates on death row being 45, according to the website.

The Alabaster and Calera fire departments recently received a nearly $413,000 grant to improve safety in both cities. (File) By... read more