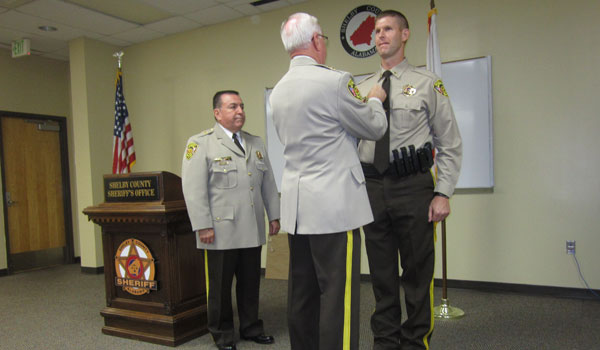 “We’re fortunate to have a lot of talented people at the Shelby County Sheriff’s Office,” Sheriff Chris Curry told those gathered for the event, noting that the employees recognized “did something out of the ordinary and took initiative.”

“It means a lot to be able to have the day to recognize these folks,” Curry said.

The ceremony began with an announcement of the promotion of Denver McCool to the rank of sergeant, which went into effect on July 18.

Seven employees received the award of Meritorious Service, an award given when “a deputy, acting in a professional manner, displays a high degree of initiative, job proficiency and ability in a sensitive situation which brings credit on the Sheriff’s Office, himself/herself, and/or fellow employees,” according to a release from the Sheriff’s Office.

Lt. Kevin Turner received the award for his help in creating the Multi-jurisdictional Tactical Response Unit from March to August 2013.

“Without his leadership, this response capability would have never been realized,” Chief Deputy John Samaniego said.

Investigator Nathan Kendrick and Deputy Matt Glassford were also honored with the award of Meritorious Service for their response to an emergency call in Shelby regarding a 70-year-old man who was unable to get out of the water on Sept. 21, 2010.

The details of the case, which led to Investigator Chris Curenton receiving the award, could not be released as they involved terrorism, but his actions played a “vital role in arresting terrorists,” Capt. Christ George said, noting Curenton even caught the attention of FBI Director Robert Mueller.

“He has done a tremendous job during his assignment,” Curenton said.

Lt. M. Hudson also received the award for his work in obtaining accreditation by the Commission on Accreditation for Law Enforcement Agencies for the Shelby County Sheriff’s Office, which is the first sheriff’s office in the state to pursue and obtain accreditation by CALEA.

“We’re very proud of it,” Samaniego said. “(Hudson) was a guiding force and kept the mission objective.”