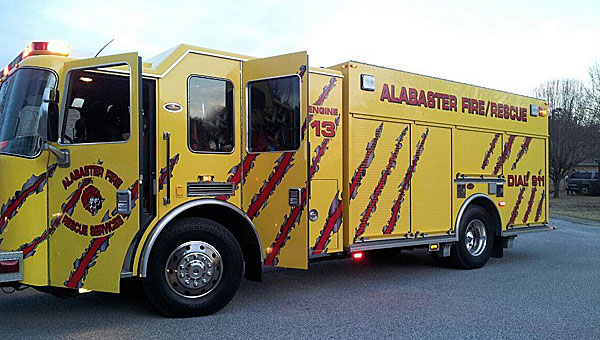 ALABASTER – Nick Massey has been on the job as a fulltime Alabaster firefighter for only two months, but in many ways it’s a role he’s prepared for his whole life.

His father Terry Massey, his father’s six brothers and his grandfather Horace Massey were fighting fires in Alabaster as volunteer firemen long before Massey was born. “My grandfather was actually the first fireman in Alabaster,” Nick recalled with a smile. “I remember hanging out at the firehouse with him and my dad.”

Sitting around, listening to the seasoned veterans tell stories of fires they had fought made a lasting impression on the young boy.

“I guess a kid always looks up to his Dad,” Massey said. “I know I did, and I thought a fire truck was about the coolest thing there ever was. Actually still do,” he laughed. “And, just think, now I get paid to ride on one. I really can’t imagine ever doing anything else.”

Massey went to college after graduating from Kingwood High School in 2006, but said “my heart was never really in it. I tried it because that’s what everybody else was doing, but I wasn’t having any fun.”

He left after one year and enrolled in Alabama Fire College at Shelton State.

“I knew immediately that this was the best job I would ever encounter,” Massey said.

Massey said he loves his job because, “you get to help people, all kinds of people. People who can’t help themselves because of sickness or tragedy or accidents. I want to be that person they can call on. This is not the best paying job in the world, but it is the best job,” he said. “It’s hard to find a fireman who doesn’t have a good heart.”

Massey said he plans to finish his EMT training and continue to live his dream of being the best fireman he can be. He said he hopes will be teaching fire prevention will be part of his responsibilities.

“I love working with kids from about kindergarten through 5th grade,” Massey said. “They’re like sponges at that age. They remember everything you tell them.”

“The job might not be as glamorous as some people think,” he said. “Luckily here in Alabaster, we don’t have but about one or two major fires a year. I’ve never had to save a person from a burning building, though I have gotten a few cats down from trees.”