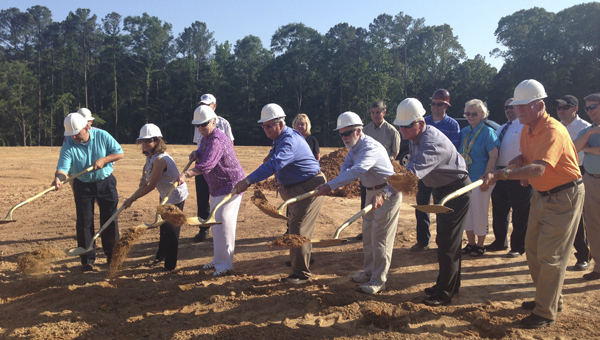 By LINDA LONG / Special to the Reporter

CHELSEA – Chelsea residents are already seeing results from a one-cent sales tax passed last May and in effect since July 1. The money is being used to fund some $10 million in capital improvement projects for the city.

Mayor Earl Niven said four lighted tennis courts are the first ever to be built by the city. “They are finished and fully functional,” said Niven, while stressing they are also intended for public use on a first-come first- serve basis. “And a tennis clinic is already scheduled for next Sunday from 2 to 4 p.m. These courts are really going to mean a lot to our middle school and high school tennis teams.”

Construction is also under way on a 29,000-square-foot community center on Shelby County 27 just across from Liberty Church. The $4 million building, is expected to be completed next summer. It will house a walking track, a senior adult center with a kitchen and dining room, an activity and game room, a music room and a room for arts and crafts.

“We’re excited about the gym and the walking track,” said Niven. “This place is going to be great for our whole community. We’ve never had anything like it before. We had about a 2,000-square-foot senior center, and that is now being included in the new development.”

In addition to these projects, the city also has a new sports complex on the drawing board to be constructed on 105 acres behind Chelsea High School. It will be built in four phases, according to Niven. The first stage, already under construction, includes three baseball fields, concession stands and parking.

The second phase includes four more baseball fields and a 4 to 5 acre lake. Phase three includes football and soccer fields, and phase four will include a six-court tennis complex.

“This was absolutely the right time for our city to begin these projects,” said Niven. “Records show that Chelsea is the fastest-growing community in Shelby County, and a recent real estate survey showed it to be one of the best places to live in the state of Alabama, but then I already knew that because I’ve lived here all my life.”

Citizens give thanks and pizza to fire and police departments