Picking at the pumpkin patch 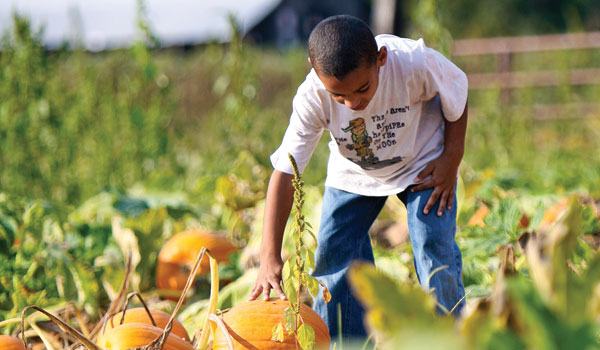 During Fall Harvest Hours, kids can pick pumpkins and participate in a variety of other activities. (File)

HARPERSVILLE—More than 20,000 pumpkins will soon line the fields of Old Baker Farms just in time for 2014 Fall Harvest Hours, which will open Sept. 27 and run until Oct. 31.

In 1998, the farm first opened the pumpkin patch to school groups and a year later, due to popular demand, the Baker’s began opening the patch to the pumpkin on afternoons and weekends.

“We’ve been doing this for quite a while,” Pam Baker laughed.

The Bakers grow between 10,000 to 15,000 school-tour sized pumpkins, which are “about the size of a child’s head,” Pam Baker said, and weigh approximately five pounds, as well as 15 varieties of carving pumpkins for families.

“You want it to just look beautiful,” Pam Baker said of all of the pumpkins, noting that there are “all kinds of variables that can destroy your crop.”

Throughout late September and October, the farm will host approximately 115 different school groups.

For Pam Baker, seeing the children learn things about farming that they did not know before is the best part of the experience.

“That is the joy of it, seeing them learn,” Pam Baker said.

During the hours the farm is open to the public, the number of visitors varies from week to week.

“By right before Halloween, we might have 100 people come through during an afternoon,” Pam Baker said.

Admission to Fall Harvest Hours is $10 per person ages 2 and up. The admission price includes a variety of activities, such as a hayride to the pumpkin patch, one pumpkin per person, visits to farm animals such as ducks, geese, rabbits and donkeys, a hay maze, a corn maze, a hay mountain and stack, swinging tire horses and rides on the farm’s trackless train.

Children can also play in a cotton wagon, which Pam Baker compared to modern inflatables.

“That’s a big hit, they always love it,” she said.

The Alabaster Fire Department will test hydrants throughout the city over the next couple of months. (File) By NEAL WAGNER... read more