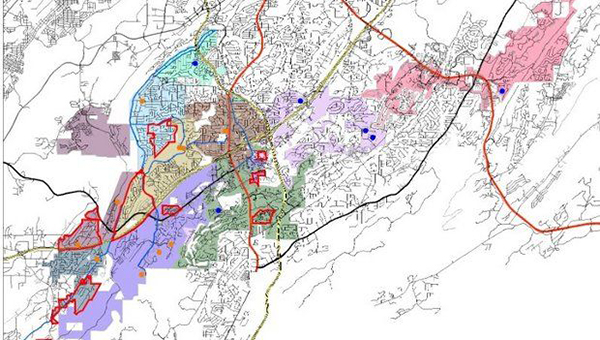 Here is a map of the proposed rezoning plan Hoover plans to vote on Oct. 6

HOOVER–Board members of the Hoover City School System are still discussing the realignment plan scheduled to go into effect for the 2015-2016 school year and accepting input from families whose students would be impacted by the rezoning.

Hoover’s proposed realignment plan states that since the last major realignment a decade ago, there has been a growth of more than 2,300 students or the equivalent of a 20 percent increase in population. This increase has consequently placed stress on the capacities of some elementary schools such as Deer Valley Elementary School.

The rezoning plan would only affect certain elementary schools and the Hoover City School System states that throughout the planning process there was an aim of achieving a richly diverse population within each school.

The main concerns parents have about the rezoning plan is the travel time and extra planning parents would have to make to relocate their kids to a new school.

Jason Gaston, publics relation coordinator for Hoover City Schools, and other board members have been working diligently to listen to as much input as possible from the community and to address parents main concerns about the rezoning.

Hoover City Schools addressed the fact that rezoning is a disruptive process and they would like to minimize the frequency of that disruption by listening to all opinions to make the best decision possible.

Last Monday board members had the opportunity to listen to the public voice their opinions on the issue and Gaston says the board will continue to accept public input at rezoning@hoover.k12.al.us.

Since the initial version of the realignment proposal was released, the original proposed plan has undergone significant refinement and adjustment in response to feedback according to the latest summary the school board has released.

Hoover will continue to listen to feedback from the public to make an informed decision before coming to a conclusion.

The hope is that a conclusion will be reached when a final plan is presented to the board at its meeting on Oct. 6 for a vote.

The Cahaba Valley Elks taught third graders at Helena Intermediate School about the history of the American flag on Sept.... read more