VINCENT – A 33-year-old Arkansas man is being held in the Shelby County Jail without bond awaiting extradition to Missouri after citizen complaints led to his Sept. 11 arrest. 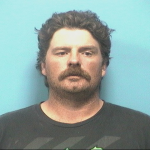 The Shelby County Sheriff’s Office arrested Robert Waylon Albritton, who lists an address in the 400 block of Greene 704 Road in Paragould, Ark., on Sept. 11 on a fugitive from justice warrant. Albritton was wanted by law enforcement authorities in Dunklin County, Missouri, on a first-degree sexual sodomy charge stemming from a Feb. 18 incident in which he allegedly used “forcible compulsion” to commit sex acts on the victim.

After receiving the complaints, the SCSO sent deputies to patrol the area, who soon spotted a pair of dump trucks driving on the road – one of which was driven by Albritton.

The deputies stopped the trucks, and discovered Albritton had an outstanding warrant while checking his information. He was then arrested and booked into the Shelby County Jail to await extradition to Missouri.