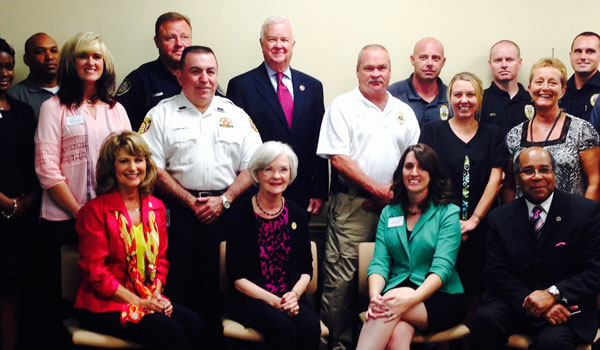 The program “helps the victim assess the predicament they’re in because sometimes they don’t realize,” Chief Deputy John Samaniego said, noting Shelby County Sheriff’s deputies and the Calera Police Department were trained in the assessment “about a month ago.”

The Lethality Assessment Program is an on-scene screening tool used with victims of domestic violence. The questionnaire, administered by first-responders to the victim on-site, assesses if the victims are at high risk for lethal level violence.

“It avoids (the victim) going back to the house,” Erin Melaney Bodden, executive director of SafeHouse said. “It’s a safe time for (the victim) to gather their stuff.”

“Thank you for risking your life and for doing this,” Bentley said. “I hope that we can bring attention to this (issue) and that we won’t be a statistic.”

Bentley is in the process of visiting each of Alabama’s 18 women’s shelters.

When asked about what effect recent news highlighting domestic violence had on raising awareness of the crime, Bentley emphasized the need to focus on every case.

“Ordinary people are going through this everyday, and their lives are just as important to God as the (partner) of an NFL player,” Bentley said.

Bodden also emphasized the role the shelter plays in the lives of domestic violence victims.

“We try to figure out what needs to happen in order for her to live the life she’s looking for,” Bodden said of the shelter’s mission. “Sometimes our victims don’t have anywhere else to go.”

To learn more about SafeHouse of Shelby County, visit Safehouse.org.