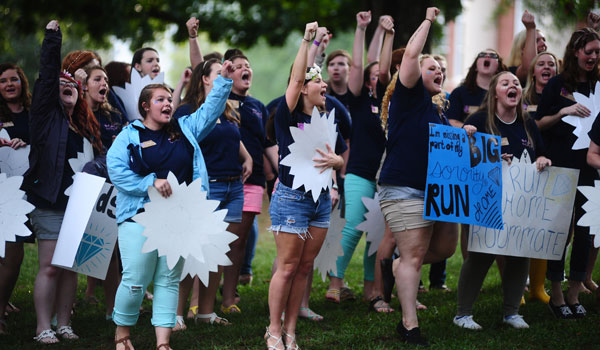 MONTEVALLO—More than 100 University of Montevallo students sat anxiously on the steps of Palmer Auditorium, while the university’s five sororities chanted and cheered on the opposite lawn.

Approximately 300 friends, family and fellow students lined the street to watch the festivities during the university’s fall 2014 bid day.

Savannah Buttram, a freshman from Alabaster, said she was both nervous and excited about finding out which sorority she would be pledging.

“I have the one I want in my mind,” Buttram said, noting that rush was not as stressful as she imagined it would be.

“I loved meeting all the new people. I’ve met so many new girls already, so many people I know are going to be my best friends,” she said.

Lillie Walker, a freshman from Grove Hill, said her family was a primary influence in her decision to join Greek life at the university.

“It’s been great,” Walker said. “My older sister was in a sorority and she influenced me to go into it.”

The girls participated in rush activities from Friday until bid day on Monday, Sept. 15 when the girls received a sealed envelope, containing the sorority that chose them.

The girls were given a signal to open their envelopes before screaming and sprinting across the field to their respective sororities.

Kimary Dickerson, from Odenville, was thrilled to be selected as a Phi Mu.

“It’s what I wanted from the very beginning,” she said, smiling. “They are the ones who convinced me to go through rush.”

The Pelham City Council will hold a special-called meeting and a Water Board meeting on Sept. 22. (File) By MOLLY... read more