ALABASTER – A 30-year-old Thorsby man was arrested on drug-related charges on Sept. 15 after Alabaster police officers allegedly discovered crystal meth, marijuana and drug paraphernalia in his truck during a traffic stop. 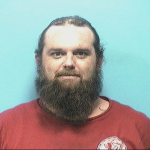 Bell’s arrest came after the Alabaster Police Department received a call at about 9:30 a.m. on Sept. 15 reporting debris littering travel lanes of Interstate 65.

“Knowing that such debris could cause serious property damage, or even a dangerous wreck, (officer Chris Benninger) hurried to investigate,” read a post on the department’s Facebook page. “When he arrived he found a shredded tire from a tractor trailer scattered across the roadway. Nearby, he saw the truck from which the tire came.”

According to the department, Benninger noticed several tires on the truck were in disrepair while he was talking with the driver, prompting a call to the department’s motor carrier inspectors, officer Brett McMurray.

“After inspecting the truck, Officer McMurray placed it out of service because he determined the truck to be a danger to our community,” read the post. “While talking to the driver, both officers became suspicious that more was afoot. They smelled marijuana coming from the inside of the cab of the truck, so they decided to search it.”

During the search, the officers allegedly discovered marijuana, crystal methamphetamine and drug paraphernalia, prompting the arrest.

Bell was released from the Shelby County Jail on bonds totaling $6,000 the same day he was arrested.