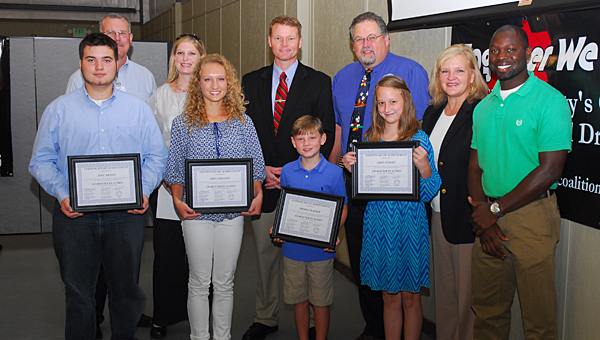 ALABASTER – Whenever Helena Middle School Assistant Principal Jennifer Cofer sees eighth-grader Alex Tilton in the vicinity, she knows she knows there’s no chance she will open a door by herself.

“I have never walked through a door that I had to open myself if Alec is anywhere around,” Cofer wrote in her nomination of Tilton for the first Character in Action award. “If someone’s arms are full, Alec relieves that person of the burden. He doesn’t ask, but he insists on helping.”

“These students best exemplify these characteristics,” Shelby County Schools social worker Emily Littrell said. “We want our students to be prepared academically, but this is a chance to celebrate something that is equally important: Well rounded students that have strength of character.”

In her nomination of Dudley, HIS fourth-grade teacher Natalie Landrum said Dudley had “incredible attitude and patience toward students with special needs,” and said she “melts my heart when I see how she treats these students.”

HES teacher Pam Clay and counselors Maegan Vick and Shelly Johnson said Washer served on the school’s leadership team, and recently made announcements every day for the school’s food drive. Through his work with the leadership team, Washer helped to collect more than 1,500 non-perishable food items to donate to Oak Mountain Missions.

HHS staff members said Atkinson works with a special-needs student every day in her photography class, and often encourages the student and provides feedback on their images. Atkinson always “treats all peers with fairness and respect, regardless of their personal challenges,” read her nomination.

The second annual Taste of Pelham event hosted by the Pelham Library Guild is on Oct. 7. (Contributed) By MOLLY... read more