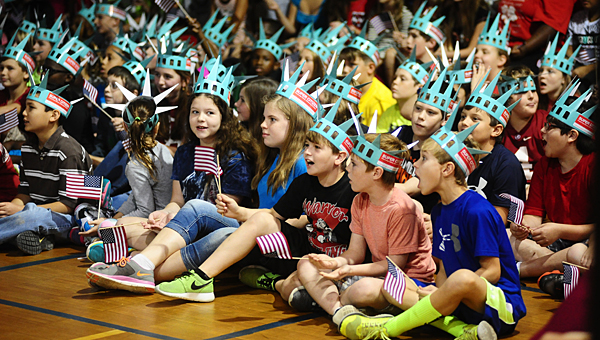 Kids gather in the Thompson Intermediate School gym on Sept. 19 to kick off the Super Citizen program. (Reporter Photo/Jon Goering)

ALABASTER – Drawing comparisons to George Washington, Abraham Lincoln and Thomas Jefferson, a group of locals soon will find themselves among a distinguished group when they are chosen by students at Thompson Intermediate School.

Through the Liberty Learning Foundation’s Next Great Americans tour, which travels to schools across the nation each year, TIS students will break up into “Torch Teams” over the next few months to select and honor those they believe are “Super Citizens.”

Each group will present their Super Citizen, which could be anyone from a military veteran to a teacher, with a small Statue of Liberty replica statue containing an actual piece of the real statue.

“Each team will honor real-life American heroes that you know. This can be anyone you think is truly a Super Citizen,” said Rachel Rainwater, a member of the Next Great Americans tour who dressed as the Statue of Liberty.

Hundreds of TIS students donned green crowns and waved small American flags as they gathered in the school’s gym on Sept. 19 to kick off the Super Citizen program, frequently chanting phrases such as “Freedom” and “Liberty.”

“The mission of this program is to make sure you are excited about America’s history and the important role you will play in its future,” said TIS Principal Brent Byars, noting the kids will learn about American figures such as Washington and Lincoln. “They all started out just like you. They were boys and girls who achieved greatness through their passion, creativity and hard work.

“Maybe we will be sitting in here talking about you one day,” Byars added.

The kids gasped and laughed as Rainwater told them the Statue of Liberty wears the equivalent of a size 879 shoe, has 8-foot-long fingers and features more than 300 steps leading from the ground to the statue’s crown.

Rainwater explained the Statue of Liberty was built in Paris, France, and was assembled there before it was broken into pieces and shipped to America. The statue was erected in New York Harbor on Oct. 28, 1886.

By GRAHAM BROOKS / Staff Writer COLUMBIANA—The trial for a Harpersville woman charged with murder was declared a mistrial on... read more