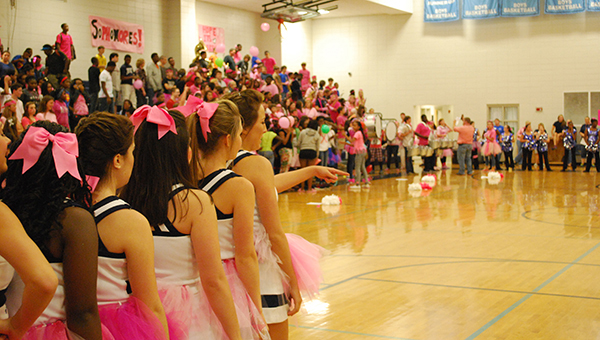 CALERA—The city of Calera and the Breast Cancer Research Foundation of Alabama have teamed up for breast cancer awareness to present “Paint Calera Pink.”

Several events are taking place this weekend starting with the Calera High School football team taking on Jemison High School in an area game match-up on Sept. 19. Before the game, pink balloons will be released to commemorate those who have died or survived breast cancer.

In addition, a “paint the town pink” decorating contest will be held on Friday as well.

On Saturday, the Calera Youth football program will take on West Blocton, and everyone is encouraged to wear “Calera Goes Pink” t-shirts. Sponsorships are available for both games.

The program, which is in its fourth year, has allowed the city to raise more than $77,000 with the Calera Goes Pink! community effort.

“The dollars that you’re giving for this stay in Alabama,” event coordinator Kate Kiefer, noting the Breast Cancer Research Foundation of Alabama gives the money to UAB to use for research.

The fourth annual “Calera Goes Pink” golf tournament will be held Sunday, Oct. 19 at 1 p.m. at Timberline Golf Club. Sponsorships start at $50, and there are opportunities for sponsors to have two or four player teams.

Kiefer emphasized the importance Calera’s donation makes towards finding a cure for breast cancer in conjunction with UAB’s research program.

“Calera is truly making an impact throughout the world,” Kiefer said.

Members of the University of Montevallo baseball team congratulate players in the Calera Field of Angels league. (Contributed) By DREW... read more