Eagles soar past Jemison at home 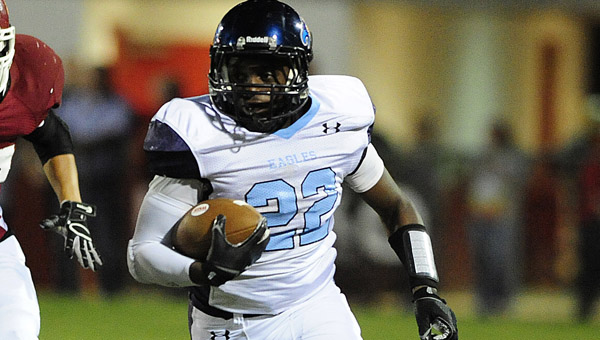 CALERA — The Calera Eagles brought their record to 3-1 on the season as they cruised past the Jemison High School Panthers on Sept. 19.

It took the Eagles no time at all to jump ahead of the visiting Panthers. On the third play from scrimmage running back ShaKeith Tyes burst through a hole and sprinted for a 49-yard touchdown. The extra point put Calera ahead 7-0 with nearly 11 minutes left in the first quarter.

After a quick, ineffective drive by Jemison, the Eagles quickly found themselves in the end zone again. They were able to piece together a nine-play drive capped off by a 16-yard touchdown reception by wide receiver Vontraer Jones. The Eagles led 14-0 with five minutes left in the first quarter.

Jemison followed the Calera scoring drive with another unsuccessful possession and were forced to punt after only three plays.

Calera added three more touchdowns before Jemison got their first. The Panthers scored on a quarterback sneak with 1:33 left in the first half.

The Eagles returned the ensuing kickoff 82 yards for a touchdown and took a 49-7 lead into the half.

In the second half Calera put their offense on cruise control and were able to crush any comeback hopes for the Panthers. The Eagles won with a final score of 63-15

“We came out and set the tone early and that snowballed and we had a lot of success,” said Calera head coach Wiley McKeller. “We had a tremendous week of practice and it didn’t surprise me that we went out and played well early.”

Calera will resume play as they travel to Shelby County High School Sept. 26.