Did Alabaster nearly have a domed stadium? 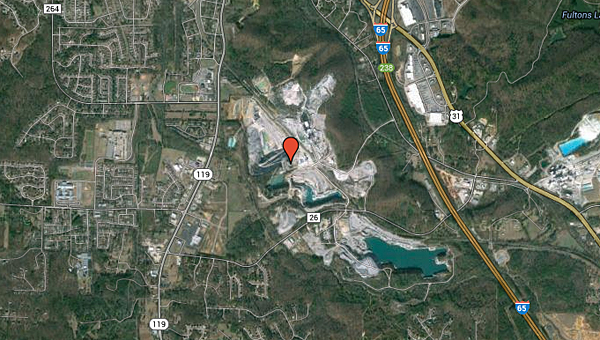 Alabaster leaders considered constructing a domed stadium in what was then an abandoned quarry off Fulton Springs Road. The quarry currently is active. (Contributed)

ALABASTER – For former Alabaster City Councilman Bill Derryberry, his decision to pursue a more-than-60,000-seat domed stadium in an unused quarry in Alabaster in the 1990s was all about the timing.

“The (Canadian Football League) was still in Birmingham at that time, and we knew there was a quarry that wasn’t being used in the city,” Derryberry said during a Sept. 23 interview.

Derryberry, who was a schoolteacher while he was serving on the City Council in 1995, frequently traveled to high school football games in Alabama, and said some of the high school stadiums he saw caught his eye.

“Some of the stadiums we attended were built into natural valleys,” he said. “We started thinking ‘Where around here could we put a stadium that could hold a lot of people?’”

The answer came in the form of a then-unused quarry behind what is now the Publix shopping center off Alabama 119.

“I drew it up just sort of freehand and presented it to the city engineer,” Derryberry said. “He got on the idea, and he determined it would fit in that quarry.”

According to city records, the City Council voted during a March 16, 1995, meeting to appoint several men to a “stadium advisory committee,” and also agreed to pay about $2,000 to send the committee to Atlanta and Detroit to look at domed stadiums in those cities.

“We went to the stadium the (Detroit) Lions played in at that time. I even have a picture somewhere of all of us up on the roof of that stadium,” Derryberry said.

As proposed, the Alabaster domed stadium would have featured a retractable roof, between 60,000-70,000 seats and an on-site parking deck, Derryberry said.

“We called it the hole-bowl,” Derryberry said with a laugh.

Council minutes from 1995 indicated the project at one time had the support of then HealthSouth CEO Richard Scrushy and radio personalities Doug Layton and Paul Finebaum.

“Mayor Wheeler mentioned that Richard Scrushy with HealthSouth had just this morning committed four to six million dollars toward this project,” read council minutes from April 6, 1995.

The Stadium Advisory Committee held at least one breakfast meeting at Alabaster’s Quincy’s restaurant in May 1995, during which there was a mention of a “500-600 room” conference center and hotel on the stadium site, according to council minutes.

In addition to courting the Birmingham Barracudas CFL team, the city also was looking to draw the University of Alabama football team to the proposed domed stadium, Derryberry said.

“There were some who thought we should reach out to teams who were playing in Birmingham at that time to see if they had a propensity to come to Shelby County,” said Bobby Harris, who also was on the City Council in 1995. “That was the idea.”

But only a few months after the city began seriously considering the domed stadium, the owner of the unused quarry decided to drain the water from it and began mining stone from the massive hole, Derryberry said.

“We pursued it up to a point. The whole process was about three months,” Derryberry said. “It was an interesting experience.”

The University of Montevallo women’s cross country team is the top-ranked team in the United States Track and Field and... read more