ALABASTER – A 40-year-old Birmingham man is facing two felony charges after an Alabaster police officer allegedly found the suspect in possession of a stolen car and crack cocaine during a Sept. 21 traffic stop. 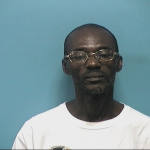 According to a post on the Alabaster Police Department’s Facebook page, Gonzalez was patrolling in the city when he spotted a vehicle matching the description of a reckless driver.

“He called in the tag, and learned the vehicle was reported stolen out of Birmingham,” read the post, noting Gonzalez pulled the vehicle over near the 236 mile marker on I-65. “While conducting a pat down of the suspect, officer Gonzalez discovered the suspect had crack cocaine packaged for sale in his pocket.

“The suspect told officer Gonzalez that he was a drug dealer and sold crack to support his powder cocaine habit,” read the post. “When officer Gonzalez questioned him about his reckless driving, the suspect admitted to driving recklessly, which he blamed on the cocaine he snorted about 15 minutes before the stop.”

Second-degree receiving stolen property and illegal possession of a controlled substance are both Class C felonies. If convicted of the crimes, Crenshaw could face up to 10 years in prison per charge.

Taste of Shelby County raises more than $10k for…