PELHAM—Get in the Halloween spirit with the Pelham Public Library’s True Hauntings and Mysterious Tales presentation on Oct. 25 as paranormal investigator and author of “Haunted Shelby County,” Kim Johnston, visits the library for a special presentation and book signing. 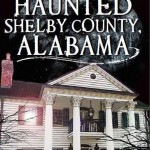 Johnston founded Spirit Communications and Research of Alabama, a paranormal investigation group, in 2012 after her own experience with paranormal activity.

Soon after moving to Chelsea in 2008, Johnston discovered her home was haunted. It began with unexplained sounds.

“I tried to brush it off,” Johnston said, but the strange occurrences continued. “I started getting poked in the middle of the night… I heard a small child’s voice saying ‘Mom?’ It really spooked me.”

Those around her were experiencing paranormal activity as well, especially her oldest son.

“He was having a lot of anxiety, he couldn’t sleep at night,” Johnston said. “He was hearing things… all kinds of sounds and voices.”

Johnston began to research and discovered the subdivision she lived in was once the site of an old town, and her home was located between two old cemeteries.

“This was a town,” Johnston said. “These were family farms, there was a train stop there as well.”

Johnston founded Spirit Communications and Research of Alabama to “help families who are going through similar situations.” She also investigates well-known haunted sites throughout the state.

On Oct. 25, Johnston will share her own story and some of her experiences as a paranormal researcher. She will also bring a slideshow and audio clips capturing paranormal activity and tell some of the stories found in her book, “Haunted Shelby County.”

“It’s kind of a behind the scenes look at ‘Haunted Shelby County,’” Johnston said.