Pelham shut out at Northridge 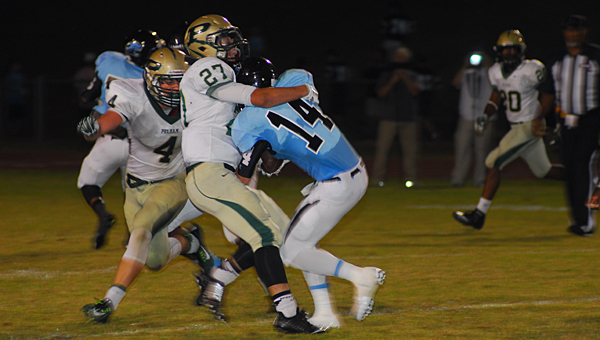 Pelham’s Devin Jenkins (27) and Connor Christian (4) take down a Northridge player during the Panthers’ 38-0 loss to the Jaguars on Sept. 26. (Reporter Photo/Neal Wagner)

NORTHPORT – The Pelham Panthers mustered only 37 total yards of offense on the road at Northridge on Sept. 26, falling to the Jaguars 38-0.

“This is what I told them: When they decide they want to play, we can beat anybody. When they don’t make that decision, anybody can beat us,” PHS head coach Brett Burnett said after the game. “We’re not good enough to go through the motions and beat anybody. We’ve got to play as hard as we can play every snap, every Friday night to have a chance to win.

“Tonight was another repeat of (the week two loss at) Jackson-Olin, and I don’t understand the lack of effort and lack of execution,” Burnett added.

The Jaguars ended the night with a total of 341 yards.

Rushing leaders for the Panthers were RJ McCall, who recorded 10 yards on five carries, Elisha Hudson, who carried the ball four times for nine yards and Logan Burnett, who ended the night with nine yards on three carries.

The Jaguars added a pair of touchdowns in the third quarter: One on a five-yard run and another on a 48-yard pass. The final score of the night came with 5:15 left in the game when Northridge punched it into the end zone from six yards out.

Kingwood’s Charles White looks for room to run in a 49-12 route of Evangel-Montgomery Sept. 25. (Reporter Photo/Drew Granthum) By... read more