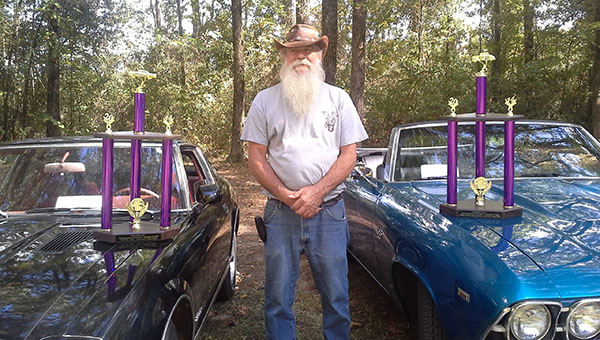 Howard Stamps poses for a picture with his two prize winning cars. A 1969 Chevelle and a 280 ZX Datsun. CONTRIBUTED

CALERA – Calera Elks hosted their ninth annual Car and Truck show Saturday, Sept. 27 on a day that was filled with custom cars, a woodcarving artist and plenty of entertainment for the whole family.

Along with the showing of the classic and late model cars and trucks, there was oldies music, food, vendors, door prizes and much more at the event held on Pilgreen Drive.

Trophies were awarded to the first place winner and best of show vehicles.

A charity ride was also organized to raise funds for medical expenses for Ryan Scott who was diagnosed with Post Transplant Lymphoprol Disease.

Howard Stamps received trophies for his 1969 Chevelle and 280 ZX Datsun. The Chevelle received the people’s choice award and the Datsun received a first place trophy for the open category.

The Alabaster School Board agreed on Sept. 29 to up its rental payments to the city of Alabaster. (File) By... read more