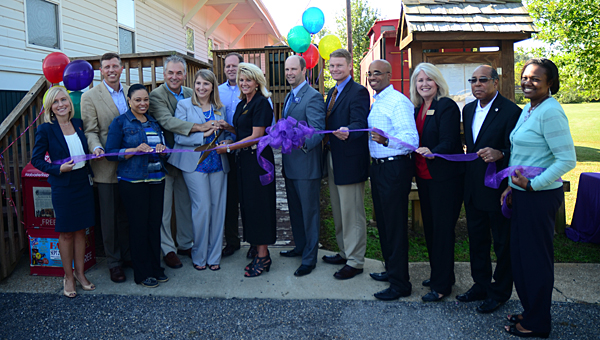 “One year ago, it was more of a dream that we wanted to come to Shelby County,” Egan said as she was surrounded by about 25 Alabaster, Shelby County and Big Brothers Big Sisters representatives at Alabaster’s depot building on Oct. 1. “It’s been a journey. I’m excited about what’s coming. I’m excited to serve the children of Shelby County.”

Over the past several months, Big Brothers Big Sisters has conducted pilot programs in cities such as Vincent and Montevallo, and is looking to connect even more kids with mentors through its new office in the Alabaster depot building.

“This means a lot,” said Shelby County Commissioner Mike Vest, a former little brother in the program when he was a child. “You don’t know how many lives you are going to change over the next 40 years.”

During a Sept. 15 meeting, the City Council voted unanimously to allow Big Brothers Big Sisters to use an office in the depot, which also houses the city’s Parks and Recreation Department.

The office previously housed interim Alabaster school superintendent Dr. Phillip Hammonds before the Alabaster Board of Education acquired its own office space in early 2013.

Big Brothers Big Sisters will use the Alabaster office space for administrative purpose, and will not host programs at the depot location.

“Any way we can be of assistance in making someone’s lives better, I’m all for it,” Alabaster Mayor Marty Handlon said during the ribbon cutting ceremony. “We are happy to be a partner.”