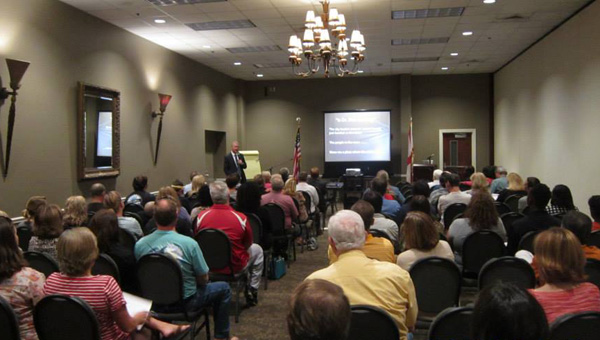 One of Coefield’s priorities is to connect the curriculum throughout each grade and school level to ensure that students are prepared as they move up.

“We’re kind of disconnected,” Coefield said, noting his goal is to create a curriculum that “spirals and works together.”

In addition, Coefield talked about strengthening the curriculum through the addition of academies at the high school level. Through partnerships with local universities and colleges, academies such as a law academy and an engineering academy will be added, “so our students are really challenged,” Coefield explained.

“I’m hoping that next year, we’ll begin to see some of these academies,” Coefield said.

But Coefield stressed curriculum improvements would not only be geared towards gifted children.

“You can’t teach gifted kids in isolation,” Coefield said. “It’s about what goes on in the classroom every day.”

A number of PCS parents raised concern about the school system’s website and lack of communication between parents and the schools.

Coefield acknowledged the school system has faced challenges due to outdated technology and network problems.

“The first week of school, we were trying to get our software to work… get the lunch rooms up and running,” Coefield said, noting the school system has had to “prioritize” fixing technological and communication problems.

“We’re still putting out fires on a daily basis… to make sure the kids are learning,” Coefield said.

Finally, Coefield spoke about recent changes to safety at each of the school system’s four campuses. All school facilities are now locked and visitors must present photo identification and be buzzed in to each building.

“It was my decision,” Coefield said. “I was a little surprised last year when the doors were unlocked.”

Parents raised concern about children being locked into the buildings, but Coefield reassured them the buildings were only locked to those entering and still complied with fire code.

“It’s about security for our kids,” Coefield said. “I’m sorry, but that’s really a non-negotiable for me.”