Third-graders salute the stars and stripes 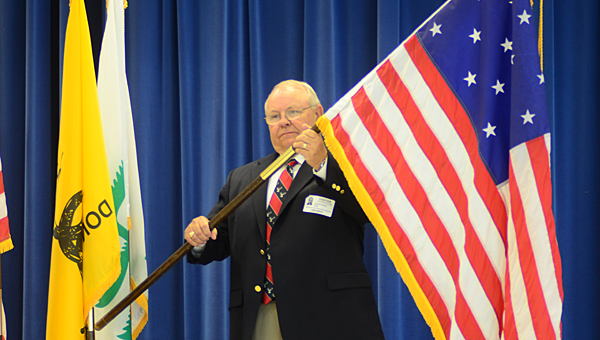 ALABASTER – Every morning, students at Alabaster’s Meadow View Elementary stand and salute the Star Spangled Banner. But Oct. 1 was a little different for the school’s hundreds of third-graders.

“We will show you what it means to be an American, what it means to be a veteran and why we should honor them and the history behind the nation’s flags,” Cahaba Valley Elks Lodge member Tom Davidson told the school’s third graders during an Oct. 1 assembly. “Veterans Day is next month. We hope that when it rolls around, you will firmly appreciate what that day means.”

During the event, several Elks Lodge members outlined the importance of veterans in protecting America’s freedom, and gave the students a history of our national flags.

After the flag presentation, the Elks Lodge members handed out hundreds of dictionaries containing anti-drug bookmarks to the kids.

The Montevallo High School football team will forfeit three wins after the school self-reported an eligibility indiscretion to AHSAA, according... read more