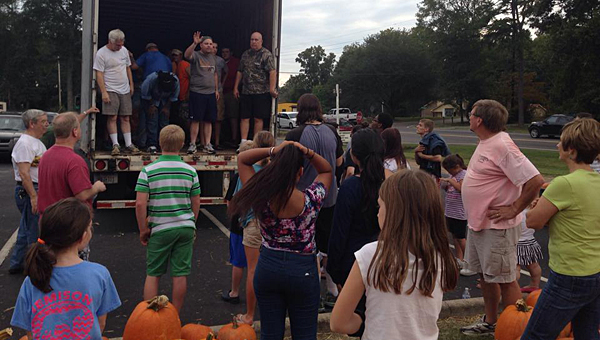 ALABASTER – The several groups of volunteers who helped to unload nearly 3,000 pumpkins from the back of a delivery truck on Sept. 29 admitted the work was hard. But they also pointed out they wouldn’t have been anywhere else on Monday night.

“It’s funny. The kids who helped said ‘This is really hard work, but it was so much fun,’” First Presbyterian Church of Alabaster office administrator Denise Barnes said during an Oct. 1 interview. “Everyone was really excited.”

The church is continuing a longtime tradition this month by spreading thousands of pumpkins around the church grounds and selling them to raise money for local nonprofits and charities.

This year, the Thompson High School wrestling team, local Girl Scouts and volunteers from the Alabaster YMCA were waiting at the school when the large delivery truck filled with 2,900 pumpkins from New Mexico rolled into the church’s parking lot.

“We were originally going to do it on Sunday, but it got delayed until Monday night,” Barnes said. “We had plenty of help, so it went quickly.”

Church volunteers will be on site every day through Oct. 31 selling the pumpkins to raise money for local charities SafeHouse of Shelby County and Shelby Emergency Assistance. All money raised through the patch is donated to the charities.

The pumpkin patch will be open to the public Monday-Friday from 10 a.m.-7 p.m. and from 1-7 p.m. on Sundays through Oct. 31 or until the pumpkins are sold out. First Presbyterian Church of Alabaster is located at 8828 Elliotsville Lane off Alabama 119 South.