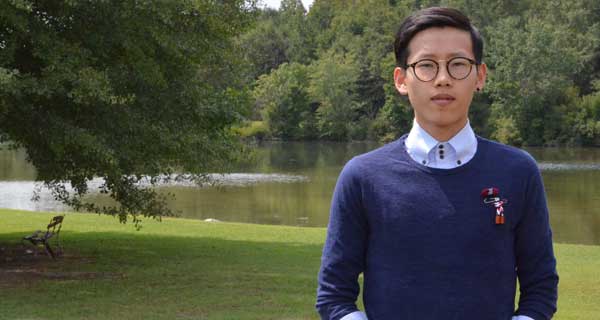 INDIAN SPRINGS – Amnesty International, a nongovernmental organization that seeks to protect human rights worldwide, has appointed ISS senior Min Gu Kim ’15 Student Activist Coordinator for the state of Alabama. In this role, he will serve as the student contact for all student groups in the state and help other high schools form Amnesty International Chapters, according to a press release from the school.

Amnesty International Southern Field Organizer Ebony Brickhouse calls Kim and other Student Activist Coordinators—most of whom are undergraduate and graduate students—“the eyes and ears for our organization” in each state.

“Over the years I have had the pleasure of working with Min Gu and watching his leadership abilities strengthen as he has led the student group at Indian Springs School,” Brickhouse said. “I am honored to work with him as he utilizes his skills in other schools across Alabama. I look forward to all that is ahead and hope that more of our youth leaders come from Indian Springs, following the lead of Min Gu.”

To prepare for the position, Kim completed an intensive, three-day student leadership training in early August in Philadelphia, Pa.

“Even though I was elected to serve as Student Activist Coordinator (SAC), I believe that all members of the Indian Springs School Amnesty Chapter are SACs,” Kim said. “We are the only high school in Alabama that has an Amnesty International Club, so we will be the forerunners and help students start new groups at their high schools by visiting them and providing them with fruitful information.”

“The fight for justice is a commitment that starts with building the human rights movement on our campus,” he said. “Our role is to bring out the best in other students, teachers, and community members so that they can be strong leaders too. By building a strong team and constantly finding ways to get people involved, we will mobilize our community to be a powerful force for dignity and justice.”

“We are proud that Min Gu has taken on this important responsibility for a cause about which he is extremely passionate,” ISS Director Gareth Vaughan said. “His commitment to working with others to effect change is evident at Indian Springs and will serve as an inspiring model for students across the state—and beyond.”