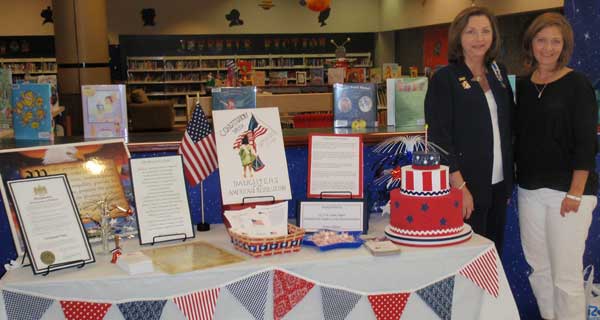 Kaye Sutley and Tracy Pflaum, members of the Lily of the Cahaba Chapter of the Daughters of the American Revolution, staff a Constitution Week display at the North Shelby County Library. (Contributed photo.)

The week of Sept. 17-23 commemorates America’s most important document, which stands as an icon of freedom for people around the world, according to a press release from the group.

“The Constitution stands as a testament to the tenacity of Americans throughout history to maintain their liberties and freedom, and to ensure those inalienable rights to every American,” the press release stated.

The Lily of the Cahaba Chapter, Daughters of the American Revolution (DAR), led by Constitution Week Chair Tracy Pflaum, organized activities to mark the celebration at the local level.

A proclamation by the City of Hoover designating the week as Constitution Week in the city kicked off the event.  Other events included activities at three schools, displays at four libraries – Hoover, Vestavia, North Shelby and Pleasant Grove; a bell ringing at a local church and participation in a Constitution Week program at Lawson State Community College.  During the week, “The Peach” radio station aired announcements to create awareness about the Constitution.

“Constitution Week is the perfect opportunity to read and study this great document which is the safeguard of our American liberties,” said DAR President General Lynn Forney Young. “We encourage all citizens across the country to take time this week to reflect on our heritage of freedom and come together to Celebrate America!”

Known as the largest women’s patriotic organization in the world, DAR has over 175,000 members. For information about DAR and its programs, visit DAR.org.  Any woman is eligible for membership who is 18 years of age and can prove lineal, blood descent from an ancestor who aided in achieving American independence. For more information about membership with the Lily of the Cahaba Chapter, based in Hoover, email robert_bailey1@yahoo.com.

Family is fed up with ongoing tampering of gravesite

This is the family plot where flowers have been stolen multiple times since 1988. (Contributed) By GRAHAM BROOKS / Staff... read more