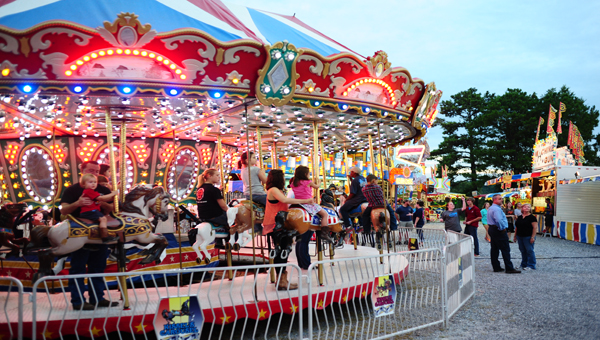 Food, livestock, music and attractions have filled the grounds at The Shelby County Fair the past few days as it returned to Columbiana.

Families, couples and children could be seen enjoying all the sights and sounds of the fair while also taking in the cooler temperatures.

Jim and Judy Jones have been coming to The Shelby County Fair for the past seven years and this was the first year they entered into a competitive exhibit.

“We had three first place showings and one second place award,” Judy Jones said. “This is the first year we have entered into the exhibits and won a best of show award. We will definitely be entering again next year.”

A hand carved brim and a wood burned gourd with a horse symbol were two of the creations the Joneses entered in the exhibit.

Other exhibits included hand made quilts, homemade pies and canned and dried foods people could visit throughout the fair.

Some of the more popular attractions include the thrill rides and carnival games that most people associate with fairs.

Fallen trees blocked traffic along Highway 52 West near the Cahaba River Bridge in Helena on Oct. 3. (Contributed) By... read more