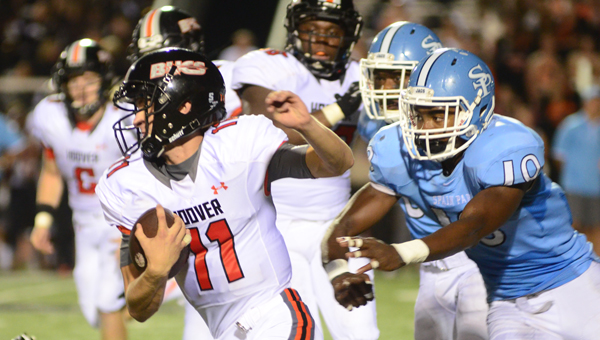 HOOVER — It wasn’t the showing the Spain Park Jaguars hoped for on Oct. 2, as the squad played host to cross-town rival Hoover High. The Jaguars came up short in the contest, 42-14.

The Buccaneers won the opening toss and deferred, giving the ball to the Jags to start off the game. Unfortunately, Spain Park’s offense went three-and-out and punted.

After the Jags’ defense forced a Hoover punt, Spain Park appeared to be putting a drive together when a Mason Duke pass turned into a tip drill and was picked off by Hoover’s No. 3.

The Jaguars’ defense stood strong, forcing another Buc punt. Spain Park punted on the ensuing drive as well, and Hoover took control of the momentum of the game on an eight-play drive capped off by a John Hutcheson pass to Victor Brackett. The Hunter Schmith extra point was good, and the Bucs held a 7-0 lead with six seconds left in the first.

Hoover added two more touchdowns, with one coming on a Bradrick Shaw run from four yards out and the other on a interception return by Alex Elam. Both of Schmith’s extra point attempts were good, and the Bucs held a 21-0 lead with 9:12 left in the second quarter.

Down, but not out, the Jags put together an offensive drive that lasted ten plays and took almost three minutes off the clock. The drive was capped off by a Duke strike to Trent Harper for 21 yards and a score. The Tyler Sumpter extra point was good, and the Jags cut the lead to 21-7 with 6:29 left in the half.

The Bucs responded two drives later when Hutcheson hit Quincy Cox on a 55-yard touchdown pass to go up 28-7 following Schmith’s point after headed into halftime.

The Jags’ defense made a play  to begin the second half as A.J. Smiley picked Hutcheson off, but again Spain Park was forced to punt. The teams traded possessions until Shaw added a 10-yard rushing score. The extra point was good, and the Bucs led 35-7 with 5:18 left in the third. Hoover took a 42-7 lead with 9:29 left in the game on a 50-yard run by Chris Vacarella, while Michael Jackson picked off Hutcheson in the endzone with 1:16 left in the third quarter, and the Jags added a touchdown courtesy of Larry Wooden’s 2-yard run with 2:48 to bring the score to 42-14.

Neither team scored again, and the Bucs took the win. Duke finished with 61 yards passing, while Wade Streeter had 63 yards on the ground.