Panthers fall to Gophers on the road 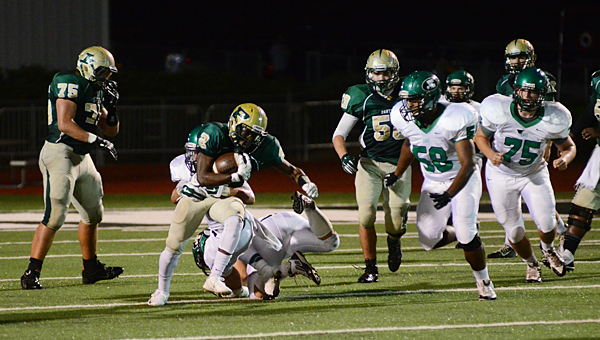 Pelham’s Giovanny Adan (22) sprints for a first down during the Panthers’ 27-14 loss to Hueytown on Oct. 3. (Reporter Photo/Neal Wagner)

HUEYTOWN – A fourth-quarter rally came up short as the Pelham Panthers fell to the Hueytown Golden Gophers 27-14 on Oct. 3. But Pelham is not yet out of playoff contention, head coach Brett Burnett told his team after the game.

“Win the next three and you’re in,” Burnett told the team. “We’ve just got to keep fighting every week.”

The Panthers outgained Hueytown in total yardage, recording 290 on the night compared to the Gophers’ 269. However penalties cost the Panthers early in the game.

Pelham broke a seven-quarter scoreless drought ­– stretching back to the Panthers’ Sept. 26 loss at Northridge ­– in the fourth quarter when quarterback Logan Burnett connected with Jeremy Ross on a two-yard touchdown pass. Austin Bowen’s PAT cut Hueytown’s lead to 27-7 with 11:03 left in the game.

“We didn’t play well offensively early, but we finally got something going,” Burnett said of the team’s fourth-quarter surge. “It’s something to build on. We’ve got to get better execution-wise, and we can’t give up 27 points.”

After Pelham’s first touchdown of the night to open the fourth quarter, the Panther defense forced a Golden Gopher three-and-out.

Pelham then capped off a 65-yard scoring drive – which was kept alive by a pair of fourth-down conversions – when Logan Burnett connected with Tyler Wilburn on a 27-yard touchdown pass.

The Panther defense forced another three-and-out on Hueytown, but the ensuing Pelham drive ended when a pass fell incomplete on fourth-and-seven at the Hueytown 29-yard line with 1:47 left in the contest.

Rushing leaders for the Panthers were Giovanny Adan, who racked up 69 yards on 13 carries, and Wilburn, who recorded 38 yards on five carries. On defense, Jon Drake recorded 15 tackles, Connor Christian had 11 tackles and Malik Copeland recorded 10 tackles.

Pelham will play at Briarwood on Oct. 10, followed by a home test against John Carroll and then a road game at Minor.