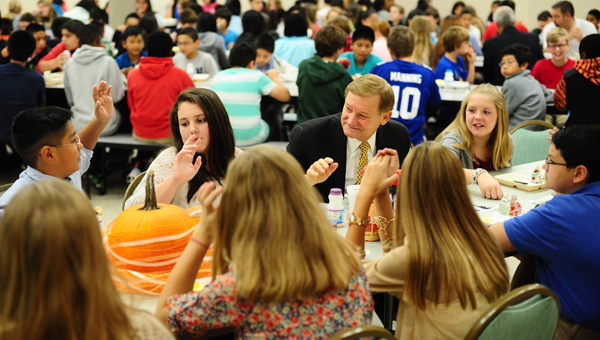 Shannon Lombard, RMS cafeteria manager, invited Bachus to visit the school and join the students for a meal.

“I just sent him an email saying we were really proud of what we’re doing in Pelham,” Lombard said. “You can tell it’s a family here.”

“She wanted me to see a project she knew I supported,” Bachus said, noting his support for free and reduced-cost nutritious meals for students. “I thought it was neat that she (invited me).”

Upon his arrival, Bachus was greeted by a welcoming committee of RMS student representatives.

“They were chosen by their teachers,” RMS Principal Susan Hyatt said. “They’re kids from every grade level so that each level would be represented.”

Although some were nervous to meet a government official, the students were excited to meet and speak with the Congressman.

“(It’s) just the regular jitters of meeting someone very important in our government and to our country,” seventh grade representative Marcus Bell said, noting he planned to ask what living in the nation’s capital is like.

“I heard they were going to take chocolate milk out (of cafeterias) and I don’t like the white milk,” sixth grade representative Ella Griggs said, noting she planned to bring this issue up with Bachus.

Bachus joined the students in the breakfast line and chatted with them while eating at a cafeteria table.

“The students were just charming,” Bachus said. “They asked me if I had ever been on Air Force One, if I’d ever met the President, which I have eight or nine times a year, at least.”

Bachus also explained to the students that after more than two decades of service, he will be retiring as a Congressman at the end of this term.

“They asked if I was tired of it, and no, I really wasn’t,” Bachus said. “I just felt that God had a different plan for me.”

The experience was not only fun for the students, it was educational as well, Pelham City Schools Superintendent Dr. Scott Coefield said.

“I think it’s just a great opportunity… to see what’s going on at the local level,” Coefield said. “I just think it’s a great learning opportunity, it makes those (government officials) real.”