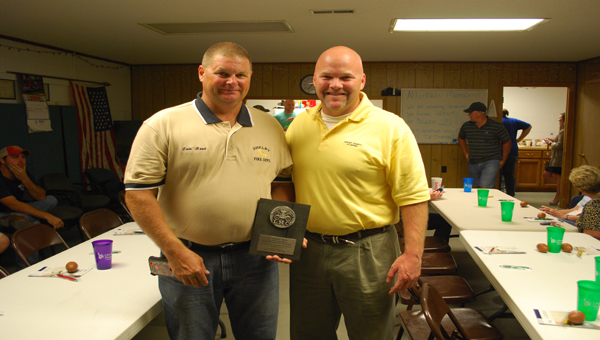 The award has been around for 20 years and this marks the first time in the award’s history that a firefighter from the state of Alabama has been nominated.

The award is given based on two criteria: community service and heroism. It recognizes local firefighters who have given back to their communities beyond their daily responsibilities or have assisted in a life-saving effort without regard for their own personal safety.

Numerous firefighters are nominated for the award across the country and congratulated on their community service efforts or heroism shown within their communities.

Cain, who has been a volunteer firefighter since 1984 and has been volunteering at Shelby Volunteer Fire Department since 1996, was humbled and honored to receive the honor for his community service efforts.

“I’m just so proud to be recognized for this award,” said Cain. “It’s nice to see that small communities are being recognized and not just the big cities. I couldn’t have done it if it weren’t for my family and all the people in the department and the community which are also considered my family.”

Cain was successful in securing a grant for a $160,000 engine pumper needed for the Shelby Volunteer Fire Department, as well as being active in public schools and churches and educating the public in safety awareness.

Vann James, of Liberty Mutual was on hand to present the plaque to Cain and spoke highly of his achievements and for being awarded.

“Liberty Mutual operates in all 50 states and has been in Alabama for over 50 years, and for Chief Reed to be nominated and awarded is saying a lot,” said James.

Later in the year, winners will be selected for the National Firemark Award that includes a $10,000 donation to their fire department as well as an all-expenses-paid trip for four to Walt Disney World in Orlando, Fla.