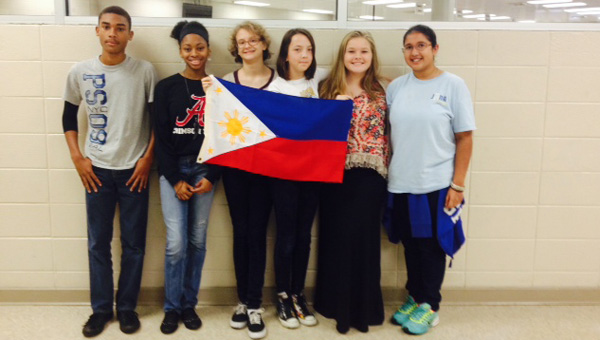 PELHAM—While some middle school students solve multiplication and long division problems, members of the Riverchase Middle School Junior United Nations program have been working to solve the problem of pollution in the Pansig River in the Philippines.

This group of six seventh and eighth grade students will represent Riverchase Middle School as the Philippine delegation to the Junior United Nations of Alabama conference at Birmingham Southern College in January.

“It’s a mock United Nations delegation,” RMS teacher and JUNA sponsor Beth Crawford explained. “We ask them to find a problem that we can find a real world solution to.”

Through research, the group identified the problem of pollution in the Pansig River, near the nation’s capital city of Manila.

“They found some pictures that really disturbed them,” Crawford said.

The RMS students then worked together and came up with a “two-part” solution, including an awareness campaign and a partnership with local “recycling centers in Manila” to clean up the river, Crawford said.

However, the project is more than just research. The JUNA student participants are tasked with understanding every facet of their assigned nation’s culture, from traditional dress to native food, RMS teacher and JUNA sponsor Hannah Rodgers explained.

“By the time we get to the general assembly, we are supposed to be Filipino,” Rodgers said. “They have to be able to answer questions about the country and produce a poster board about the country.”

The RMS JUNA delegates were provided a unique window into Filipino culture through a visit and presentation by Philippine Overseas Employment Agency Administrator, and Rodgers’ brother, Hans Cacdac.

“We know that we (as program sponsors) have to provide the kids resources, and we don’t want to just use computers,” Rodgers said. “As a Filipino, I have a way to involve them in the country.”

The RMS JUNA delegates will prepare information about their nation, problem and solution to present to more than 200 other students during the “two-day, very intensive program of meetings” in January, Crawford said.

“I think it just gives so many real world skills to our kids,” Crawford said. “They’re prepared for their futures, whatever it is.”

“The whole aim is international awareness, global awareness,” Rodgers added. “We’re all in it together… we’re supposed to help each other, figure problems out together.”