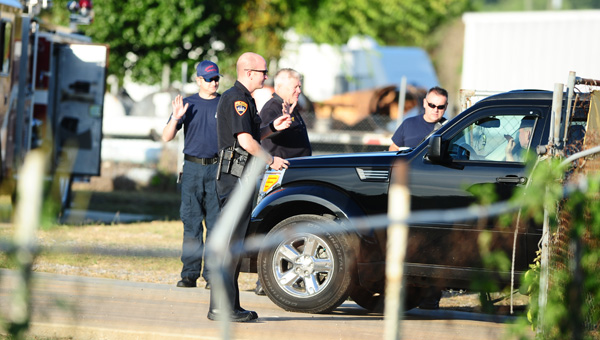 PELHAM—The Pelham Fire Department and neighboring agencies are continuing to search for a missing diver at the Dive Alabama quarry, located off of Industrial Park Drive in Pelham.

As of 2 p.m., search teams had covered around 45 percent of the 27-acre quarry and had not located the missing diver, Pelham Fire Department Deputy Chief Blair Sides said during an afternoon press conference at Dive Alabama.

“I would say we’ve covered 45 percent of the quarry,” Sides said. “We’re now into the deep depths.”

Dive Alabama reported Daren Gray, 49, of Spring Hill, Tenn., missing to the Pelham Fire Department after he did not return from a scheduled dive trip on Saturday, Oct. 4.

The search for the missing diver began Saturday evening, using searching sonar from the Calera Police Department and deep water divers to search the “probable areas” the diver may have gone.

“We searched all day yesterday,” Sides said, noting the search team “ruled out a lot of areas yesterday,” including the “shallow,” less than 60 foot deep areas of the quarry.

“We were basically searching the areas he liked to go,” Sides said.

As of 2 p.m. on Oct. 6, Pelham Fire Department Chief Danny Ray estimated more than 60 personnel, including 24 divers, were onsite at Dive Alabama.

“The challenges are basically dealing with the depths, the visibility and the terrain,” Sides said of the challenging physical characteristics of the quarry, which is around 140 feet at its deepest points, has an underwater visibility of less than 10 feet and includes many rock features and sunken objects.

“It’s a real difficult terrain (to search),” Sides said, adding since Gray dove alone, there is also no “last seen point” to work from.

A remotely operated vehicle from ISR Group LLC., in Savannah, Tenn., has been deployed underwater in the deep areas of the quarry to aide in search efforts, Ray said.

Sides confirmed Gray’s family had been notified that he is missing during a 10 a.m. press conference held at Dive Alabama in Pelham.

“The family has been notified and they are still at home,” Sides said. “It is a very trying time for them right now.”

“We have been in constant contact with the family since Saturday,” Ray said. “We’ve kept them up to date, that’s the reason we released the name.”

Sides confirmed Gray is an experienced and “certified solo diver” who had made previous trips to Dive Alabama before Saturday, Oct. 4.

“This was a very experienced diver,” Sides said. “Something obviously drastically went wrong.”

Several of Gray’s friends are helping in search efforts, directing divers to places Gray was known to dive, Ray and Sides said.

“We will search today until either we find the missing diver or until it becomes dark and we lose visibility,” Sides said.

Sides and Ray said they expect more technological support to aide in the search effort to arrive tomorrow, including two more remotely operated vehicles and drones to survey the quarry from above.

As of 2 p.m. neither the Gray, nor any of his equipment, have been located by search teams.

“We’ve found no equipment of his as of yet,” Sides said. “It does not surprise me… a quarry of this size and this depth, we knew it was going to be a difficult search.”